Phoenix Productions’ “Peter Pan” is the first Count Basie Theatre show following the announcement of the venue’s ambitious expansion plans. Uplifted (literally and figuratively) by Jennifer Townsend’s captivating performance, the transformation has begun…from the inside.

Townsend is in her mid-twenties. Based on Cathy Rigby having played Peter Pan to near 60 (and Mary Martin was 41), Ms. Townsend could be flying about, captivating Wendy and her brothers (and audiences) for three more decades. Don’t wait; catch her debut outing this weekend. If you can get a ticket. 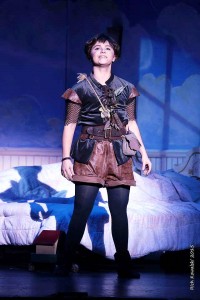 A summary: Peter Pan returns to the London home of the Darling family where he had left behind his shadow. He awakens Wendy, John and Michael and flies them off to Neverland, home of Peter, his Lost Boy pals, a band of friendly Indians (Native-Neverlanders?), played by a coterie of peppy young women, and dastardly Captain Hook and his Pirate crew. Spoiler alert: the good guys eventually vanquish the Hook gang.

Peter is traditionally played by a female, and his boyish persona is well served by Townsend. She’s uninhibited as the cocky young fellow that even demure Wendy (Jordan Gilbert, just right) wants to smooch at first sight. And if not then, surely after he/she wins over everyone in earshot with “I Gotta Crow” and “Neverland.”

Flying is essential to the show, and Phoenix has not skimped. Peter’s exhilarating entrance is eclipsed soon after by “I’m Flying,” with him and the children suspended on barely visible wires. (Even if they were clotheslines you’d hardly notice. Townsend is as poised aloft as she is on the boards.)

Michael Patierno’s Captain Hook, less of a smarmy dandy than others I’ve seen, fears the croc responsible for his prosthetic extremity, but his villainy is unquestioned (except by first mate Smee, a first rate Todd Aikens). Patierno sings (and enunciates!) the role very well, including one of the plumiest lyrics ever written when the character refers to himself as “Mrs. Hook’s baby boy.” Think about it. 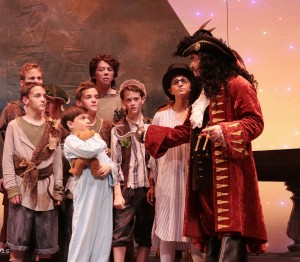 As John and Michael, Michael Friedman and Jack Sweeney are as natural as any two flying, singing boys in white nightshirts could be. Others who excel in the large talented cast include Rachel Brown as Mrs. Darling (and later Wendy, alas, grown up) and Patricia McCarron as the spritely Tiger Lily, whose “I Gotta Crow” duet with Peter is a gem. And for a double-take, brothers Noah and Josh Ferro appear in a flash-by as twin Lost Boys.

Shifting designer Andrea Nice’s spare, effective sets by hand as scenes are beginning or ending covers gaps smoothly. Anthony Calicchio’s busy lighting is inconsistent (Hook poisons Peter’s medicine in the dark), but the starry backdrop is a nice effect, and applause-applause for Tinkerbell being a full light beam rather than a jittery laser. Colorless pretty much describes the costumes. Except for Hook’s dark red longcoat and one Indian girl in bright red, shades of brown predominate. Hardly eye-catching. Even Peter is in nondescript cutoffs and a motley brown top. (Couldn’t locate a green tunic?)

James Steele’s resourceful choreography ranges from pirate hijinks to the feathered faction’s indigenous moves, and musical director Robert Sammond keeps the ensemble numbers snappy and the orchestra tight. A heap of credit goes to director Michael Kroll for pulling everything together into a smoothly paced package. (Of course, he did start out with an advantage: Jennifer Townsend.)