Canine Comedy and a Hearty Hoedown on NYC Stages

The revival of “Sylvia,” its first on Broadway, is like a three-quarter carat diamond nested in Elizabeth Taylor’s engagement ring’s setting. It’s pretty enough, but really, what’s it doing there? Other than justifying the presence of Annaleigh Ashford, I mean.

The Cort is a mid-sized Broadway theater, laid out like a high school auditorium: fewer but wider rows facing a wide stage. A. R. Gurney’s “Sylvia” was at home off Broadway and in countless Regional and community theaters (it was the most-produced play in America in 1996), but sprawled across this stage its intimacy is diluted, its flaws magnified. Withal, however, there is Annaleigh Ashford. As overmatched by its venue as “Sylvia” is, its Sylvia sparkles throughout. 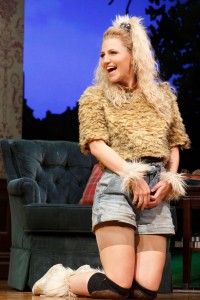 Sylvia (Ms. Ashford) is a mixed-breed dog, an apparent stray (although name-tagged), brought home from the park by Greg (Matthew Broderick). The two promptly bond, big-time, to the consternation of Greg’s teacher-wife Kate (Julie White), whose cause is introducing Shakespeare to inner-city kids. Kate has no time for any dog, much less one who’s her rival, and the not-so-typical triangle becomes a battle of wills between wife and pet.

Sylvia is given human characteristics with doggie overtones (or vice versa, take your pick). She indulges her basic needs (all of them), jumps on the furniture, sulks when spanked (“You don’t have to hit!”), scratches herself and barks (“HEY! HEY!”): everything your own dog does (everything).

The amusing concept is dependent upon the Sylvia actor’s immersion and believability as a canine – and on keeping the “love story” this side of weird. Thanks to Ashford’s agility and brightly-clipped manner, the former requirement is met. Her naughty Sylvia is lovable. “My aim in life is to please,” she says, and Ashford’s aim is dead-on; she’s cute as a pup.

The latter boundary is fuzzy, due to the now-dated script and Broderick’s juvenile demeanor. The childlike nasal whine he affected for “The Producers” has infected every role since (“Odd Couple” and “It’s Only a Play,” for two). Worse, his sing-songy inflections within the whine are on a loop. A-list director Daniel Sullivan apparently turned a deaf ear to it, but to be fair, while I winced, the audience laugh-track was on a loop as well. (Broderick groupies?) 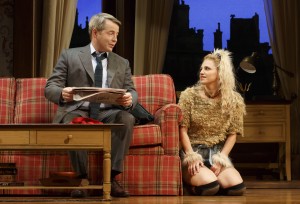 Ms. White makes more of the functional Kate than my six previous “Sylvia” outings revealed, but the role does not challenge her brilliant comedy chops. A fourth actor, Robert Sella, plays three roles: he’s spot-on as a macho dog-owner, whose Bowser services Sylvia (offstage, thank you), and as Kate’s matronly friend, whose crotch holds a special appeal for Sylvia. Sella is also a therapist of indeterminate gender, whose persona is a decade or more out-of-date. (As is Kate’s quasi-lament that there’s no physical relationship between Greg and Sylvia: “Because then it would be just an affair. And any wife worth her salt can deal with that!”)

Some theatrical vehicles lay dormant until the right actor comes along. Think “Gypsy,” waiting for Sutton Foster to age into Mama Rose. “Sylvia,” not in that vaunted company, is unlikely to see a New York stage again. But the right actor is ushering “Sylvia” into retirement with…Ha! I almost said dignity, but it’s hardly that, nor should it be. Like the ending within the play, though, it is a fond farewell, thanks to Annaleigh Ashford.

Do you like country music? I don’t…unless I’m listening to it, and, boy, did I like “Songbird.” With original music and lyrics by Lauren Pritchard and a flavorful book by Michael Kimmel, “Songbird” is as original a musical as they come. In its own way, it’s positively Chekhovian.

Okay, that’s a wisecrack, because “Songbird” actually is based, subtly and effectively, on the Russian master’s “The Seagull,” a play you need not have seen or read (or even heard of), in order to appreciate this hoedown derivative. With a uniformly excellent ten-member cast, most of whom also play one or more instruments, the twangy singing, snappy stepping and relationship-rich story come together seamlessly.

After an absence of many years, fading one-time Grand Ol’ Opry star Tammy Trip (Kate Baldwin), comes home, with a celebrity song-writer (Eric William Morris) in tow, to Nashville, where her son is a budding song writer himself, albeit one with dubious prospects. The lad is also hopelessly in love with his singing partner Mia (Ephie Aardema*), whose infatuation with Tammy’s companion sets off emotional dynamics that echo those in Chekhov’s similarly theatrically-involved family.

Song titles like “Black Widow Woman,” “Whiskey Lullabies,” “Tennessee Blues” and a dozen more, attest to the country bona fides, leavened here with rock and jazz overtones. And you’ll go far to find a match for Missy (Kacie Sheik)’s “Cry Me a River” (not that one, an original), accompanied, thrillingly to my ears, by three guitars, a cello and an amplified violin.

“Songbird” also succeeds in a particular aspect that was important to Chekhov, who insisted that his plays (except for “Three Sisters”) were comedies, despite their serious – even tragic – elements. Like “The Seagull,” “Songbird” is not frivolous, nor does it skirt serious issues (or change the ending), but it really is funny…sometimes profoundly, as in “I wish hangovers and orgasms would switch durations.” At two hours, including intermission, “Songbird” is just right.

*Of local NJ interest: In August 2014, Ephie Aardema was an excellent Cathy in “The Last Five Years,” staged in a dive bar in Asbury Park. In “Songbird,” she extends that promise with a lovely, sensitive performance as Mia, Chekhov’s Nina.