Unlike Shakespeare’s plays, which are frequently set wherever and whenever it pleases modern-day interpreters, George Bernard Shaw’s are rarely moved from their original settings. Until last week, in fact, I didn’t recall seeing a Shaw play set anywhere but where and when he intended. Nearly all are set in the British Isles in defined time periods, and include copious notes regarding their settings, décor and costumes as well as on contemporary political, social and economic issues. “Pygmalion,” for example, is Edwardian London, circa 1900.

Not at the Shaw Festival in Niagara-on-the-Lake, Ontario, it’s not. Director Peter Hinton’s “new contemporary take” on “Pygmalion” is still set in London (29 Wimpole Street, to be exact), but it’s, well, today. Everything is up-dated except the text, with only a few minor adjustments, such as Colonel Pickering having served in Afghanistan rather than India.

Flower girl Eliza still voices the ‘aieeoueow’ that grates on Professor Higgins, but she does it dressed in ripped jeans. Her diction lessons are still recorded, but now on the digital equipment that dots Higgins’s high-tech digs, and Henry’s mother, for one more example, is a high-style fashion designer.

Does it work? In a word, yes. Acted natural-casual, the 1900 language doesn’t just bridge the Century, it relieves the piece of its pre-“My Fair Lady” stuffiness. Higgins (Patrick McManus) and Pickering (Jeff Meadows), both refreshingly under, say, 40, are like-minded enough to embody their friendship, and just different enough for Pickering to hold the other’s temperament in check – barely. (Higgins’s nastiness to Eliza survives the move less well. “Baggage,” he calls her repeatedly, and worse…even “slut,” which drew a gasp from the audience. At least, unlike in MFL [spoiler alert], Eliza dumps him at the end of “Pygmalion”.)

After: Ms. Sandhu as Eliza

And Eliza? Embodied by the vibrant and loverly (couldn’t resist) Harveen Sandhu, she’s a spunky curb-side flower girl, an amusing lesson-challenged student and finally a charming, graceful and, most important, assertive 21st-Century woman. The enjoyable production of Bernard Shaw’s play was the first that I didn’t leave humming Frederick Loewe’s music.

Henrik Ibsen knew from troubled women and their urges to escape traditional roles and male domination. Nora Helmer exits The Doll House through the most famous slammed door in all of theatre and Hedda Gabler Tesman chooses an even more drastic escape. In “The Lady from the Sea,” Ellida Wangel is no less tormented. A symbolic fish out of water, she first appears in the Shaw Festival’s superb version of the lesser-known Ibsen as a stranded mermaid. That haunting image informs Moya O’Connell’s stunning portrayal of Ellida throughout the play.

Even having read the play prior to seeing it, I had no idea of its emotional depth or that its five acts, admittedly short, could be compressed into an intermissionless 90 minutes, which Erin Shields’s “new version” accomplishes without a significant omission. 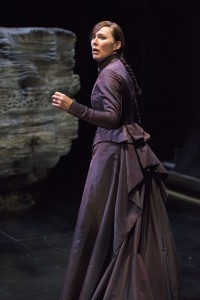 Set along a fjord in Ibsen’s native Norway, the play explores Ellida’s quandary: whether to remain in a loveless land-locked marriage or to run off with the sailor, long thought dead, with whom she had exchanged vows years before. Her obligations to her much-older husband and his two daughters from a previous marriage are at odds with the lure of the seaman – and of the sea itself. The resolution, neither Nora’s nor Hedda’s, is deceptively simple and emotionally satisfying.

It is not incidental that adaptor Shields, director Meg Roe, dramaturge Joanna Falck and, of course, Ms. O’Connell, are women. The play is, after all, titled for and centered on a woman, explored here with uncanny insight. Yes, Ibsen knew from women, and these four women surely know him back.

The book of “Sweet Charity,” written by Neil Simon, contains some pretty funny lines, but it was Cy Coleman’s jazzy score, Dorothy Fields’ saucy lyrics and Bob Fosse’s direction and choreography for his wife Gwen Verdon that fueled the 1966 show’s 18-month Broadway run.

It would be merciless to compare any subsequent Charity to the original, but Julie Martell captures enough of the New York dance hall hostess’s spunk and her touching vulnerability to give the Shaw’s “Sweet Charity” a solid center. Scaled down somewhat, but energetically performed, fast-paced by director Morris Panych, and backed by a terrific 16-piece orchestra, the show is a well-deserved audience pleaser. 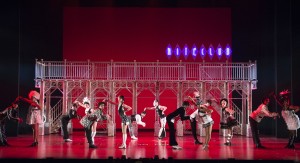 A scene from “Sweet Charity”

Charity Valentine knows there’s gotta be something better than working at the Fan-Dango Ballroom. Her involvement with an Italian movie star fizzles (in a very funny scene) and her exultant wedding plan ends when her strait-laced fiancé dumps her. Ms. Martell owns the solos “If My Friends Could See Me Now,” “I’m a Brass Band” and the plaintive “Where Am I Going”. She’s a nifty belter and a more-than-capable hoofer. She especially relishes the snippets of Fosse that dot Parker Esse’s choreography. (I did too.) 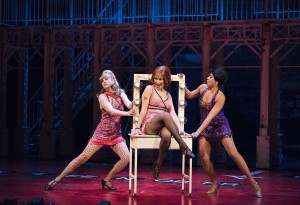 The nine Fan-Dango taxi dancers, as they were called back in the day, are fine performers all, although whoever told them to sing “Hey Big Spendah” should be arrested. Two featured chorines, Kimberly Rampersad and Melanie Phillipson, do a great job on “Baby, Dream Your Dream,” a lovely under-the-radar number that stuck in my mind for days. (Oops…there it is again.)
The Festival season, running through Nov.1, also includes “Peter and the Starcatcher,” Caryl Churchill’s “Top Girls,” Light Up the Sky” by Moss Hart, Shaw’s “You Never Can Tell” and several other works. For a season-schedule brochure: 800-511-SHAW or online at www.shawfest.com (Niagara-on-the-Lake is a hassle-free seven hour drive from central New Jersey, and the current $$ exchange rate translates to a U. S. discount on items and services of nearly twenty percent!)