“Closure” is a potboiler revolving around several red herrings and a MacGuffin.

Translation: The world-premiere play at New Jersey Repertory Company is a fairly standard noir mystery/thriller built on intentionally misleading clues and a major element that turns out not to matter. Those characteristics don’t make it bad; let’s just say it doesn’t break any ground. 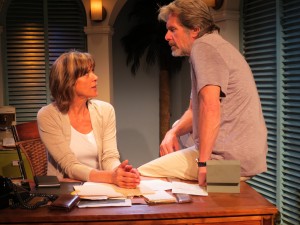 “Closure” was inspired, according to playwright Richard Dresser, by the case of college student Natalee Holloway, who went missing in Aruba in 2005. In the play, Jane and Peter’s daughter disappeared from an unnamed Caribbean island while on spring break. After three months, the couple is increasingly frustrated by Roy, the island’s police detective, whose professed eagerness to solve the case is belied by his lack of progress.

Revealing more than the plot’s bare bones would be a spoiler. Know that there is considerable tension between Jane, who has made several trips to the island, and her husband Peter, who exhibits less concern. Between them stands Roy, whose attention to the case may or may not be influenced by his interest in Jane, who may or may not share that interest. And finally there’s Kenny, a resort waiter who may or may not know more than he’s telling. That’s all you get from me.

New Jersey Rep has become a live-theater destination for actors best known for their work in TV and film. “Closure” features two such: Gary Cole, a regular opposite Julia Louis-Dreyfus on HBO’s “Veep” (and the nasty boss in the cult-classic film “Office Space”), appears as Roy, while Jane is played by Golden Globe and Emmy nominee Wendie Malick of HBO’s “Dream On” and TV Land’s “Hot in Cleveland,” and who is featured in the upcoming series “Rush Hour.”

Cole and Malick work smoothly together, although he takes ‘laid-back’ to a new level. In an effort to portray Roy as a casual Caribbean émigré, Cole underplays the role to a crawl, both physically and vocally – presumably with director Joe Cacaci’s blessing. It might have been an off night, but in the performance I saw, Cole’s slouch was pronounced and his important final speech, barely audible, was not.

Ms. Malick fares better, especially in scenes with Victor Verhaeghe, playing husband Peter, whose evasions any wife would resent. The script tosses most of the meat her way, and Malick sinks her acting chops into what there is of it. 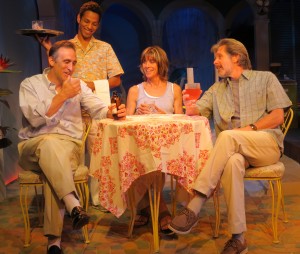 Biniam Tekola completes the cast as Kenny, the waiter who remembers his customers’ drinks-of-choice as well as a few things they’d rather he didn’t. One exchange reveals a lot about Kenny: to a suggestion that he has a good life, he replies with a blend of irony and bitterness that, sure, as “a black man living on tips,” he’s got it made.

One more plot tidbit: the most interesting resolution occurs after the anticipated resolution. Now…that’s all you get from me.