The Royal Treatment for “The Royal Family” in Madison

Plays about Theatre and Theatre People start out with a big advantage. They are written, directed and acted by people who usually know what the heck they’re talking about. No play fits this better than “The Royal Family,” and no production of George S. Kaufman and Edna Ferber’s 1927 slice-of-theatrical-life comedy could be any better than the one at the Shakespeare Theatre of New Jersey.

Despite the authors’ denial, it’s long been accepted that the play’s Cavendish family was loosely based on the Barrymore clan, with Julie Cavendish standing in for Ethel Barrymore, and Julie’s flamboyant brother Tony bringing to mind Ethel’s flamboyant brother John. Unfamiliarity with that history is no barrier to enjoyment of the play, but knowing that characters as fascinating as these were real people adds to the fun.

The focus is on three generations of Cavendish women. Seventy-year old Fanny (Elizabeth Shepherd), widow of the premiere actor of his day, is planning to tour in a play, despite serious health issues. Her daughter Julie (Roxanna Hope) is a current Broadway star, and Julie’s 18-year-old daughter Gwen (Samantha Bruce) is a star-in-waiting. The three personify glamor – characters and actors alike. 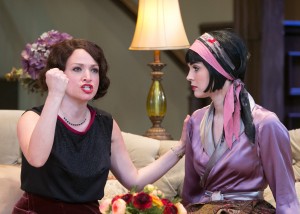 Among the others are Oscar Wolfe (Edmond Genest), the women’s manager and stabilizing influence; Fanny’s brother and his wife, whose acting careers are fading; Julie’s personal trainer, who works her out with boxing gloves; Julie’s and Gwen’s “civilian” suitors, who just don’t get it; and two household servants who prove, as Emma O’Donnell, who plays one of them marvelously, said in response to my compliment: “There are no small parts.” (Awright, Emma!)

The plot summary could not be simpler: career pursuits vs. personal-life issues. That’s about it, but made engrossing by the flow and intelligence of both the writing and the acting. Emotional outbursts by Ms. Bruce’s Gwen in the first act and by Julie, via Ms. Hope, in the second, are dramatic, heart-rending and funny all at once; Ms. Shepherd’s Fanny wistfully recalls past theatrical glories; and Mr. Genest underplays Wolfe’s wily manipulation of his clients to excellent effect. Mr. Sterling pulls out all the stops as Tony, and why not? (Think John Barrymore.) 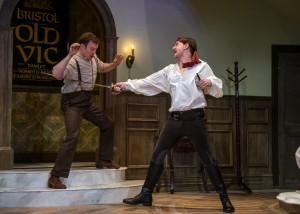 Reading the play beforehand, I was struck by the playwrights’ occasional instructions for the characters to talk over one another, precise down to the word of one character’s speech where another is to begin speaking. And damned if it didn’t sound just like a family gathering at…well, at your house, where you somehow understand all of it, jumble or not. The script also specifies a staircase to an upper level with doors to several different bedrooms. Set designer Charles Murdock Lucas has made magic – as has costumer Maggie Dick, transporting us back to the 1920s.

Director Bonnie Monte, marking her 25th year as artistic director, has blended her coterie of actors into as much a family as the coterie of actors they play so convincingly. In three acts, “The Royal Family” runs a little long by today’s standards, a factor I became aware of only by checking the time when it was over. I would gladly have spent another hour or two with these Cavendishes. I suspect you’ll feel the same.

Kerrin McCarthy’s generous donation at last month’s Phoenix Productions fund-raising Gala qualified her to accompany me to the opening. The  22-year old Middletown NJ resident graduated from Georgian Court University in May, with a major in business administration and a minor in music. “I’ve always had a love for theatre,” she said. Unfamiliar with “The Royal Family” beforehand, “I did not know what to expect…but it was amazing.” (Thanks for sharing it with me, Kerrin.) 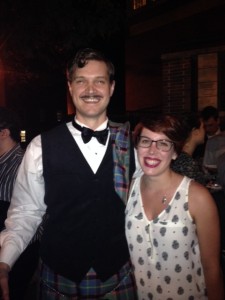 At the After-Party: Kerrin McCarthy with leading man Benjamin Sterling