The plays are the things at the Stratford (Ontario) Festival

The 13 plays in the Stratford (Shakespeare) Festival’s 2015 season, its 63rd, include four that represent the breadth of Shakespeare’s output. His (anyone’s) greatest play “Hamlet” is complemented by early-career comedies “The Taming of the Shrew” and “Love’s Labours Lost” and by one of the last-written Romance plays, “Pericles,” here aptly titled “The Adventures of” the title character.

Last staged at Stratford in 2008 with a stunning performance by Ben Carlson (this season’s Petruchio in “Shrew”), the current “Hamlet” is no less stirring. Guided by the Festival’s artistic director Antoni Cimolino and fueled by Jonathan Goad’s bravura performance, its three hours (including intermission) fly by in a series of revelations – about the play as well as the characters. 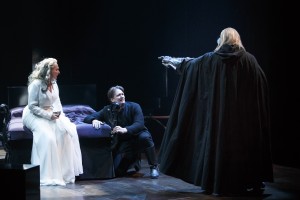 Jonathan Goad as Hamlet, Seana McKenna as Gertrude and Geraint Wyn Davies as The Ghost. (All photos: David Hou.)

The usual textural questions remain, but the one about Hamlet’s state of mind comes down on the side of sanity, with Goad switching Hamlet’s gears in a calculated manner. The Danish Prince whose uncle murdered his father and married his mother is a brooding fellow still, but he’s clearly intent on vengeance (even though he blows his best shot). Goad’s off-kilter put-on isn’t laugh-out-loud funny, but it is amusing…and endearing, lending contrasting heft to the soliloquies, which Goad utters brilliantly. He also savors, as I’d wager the playwright did, this bit of Hamlet’s advice to the players: “…speak no more than is set down for them…that’s villainous.”

Tom Rooney plays Polonius’s advice straight as has become the norm (it is sound advice, after all) and Geraint Wyn Davies masks Claudius’s venality with a jovial surface. It is a terrific “Hamlet”.

Labeling Hamlet’s mother’s hasty marriage to her deceased husband’s brother incestuous may be a stretch, but there’s no doubt about the King of Antioch and his daughter. After the Prince of Tyre uncovers their relationship, he’s forced to flee for his life. Thus begins “The Adventures of Pericles”.

An ensuing shipwreck leaves Pericles near death, washed up on a foreign shore, where he wins, by jousting, the hand of that land’s Princess Thaisa, who dies in childbirth and is buried at sea in a sealed casket. He leaves their newborn daughter Marina with a woman who conspires to have her killed when she outshines her own daughter. Before the nasty deed can be accomplished, Marina, now 14, is kidnapped by pirates and sold into a brothel where she talks her potential debauchers into respecting her virtue.

Wait, there’s more: magic potions, deaths by fire, two resuscitations and a couple of extraordinary coincidences add to the reasons the play is rarely produced today. Remarkably, the adventures are all vividly represented at Stratford on a virtually bare stage. Shakespeare put the action into words and director Scott Wentworth mined it out. 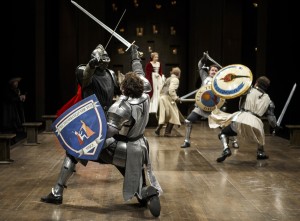 And goes a-battlin’ too. (Members of the “Pericles” company.)

Excepting Evan Buliung’s superb Pericles, everyone in the large company at least doubles. In one casting coup, Festival leading lady Deborah Hay plays the incestuous daughter as well as Pericles’s wife Thaisa and their daughter Marina. (Ms. Hay also plays Katarina in “Shrew,” but not at the same time!) Did I say rarely produced? “Pericles” is slated for production next spring at Two River Theater in Red Bank, NJ. Let the adventure continue.

With one cheeky insertion, adapter Michael Healey brings Friedrich Durrenmatt’s 1962 scientological (my word) twist-fest “The Physicists” into the present. When a police detective goes to light a cigarette in the common room of a mental institution, the head nurse says indignantly “Exactly what year do you think it is?” And Boom: it’s today, where the play is still relevant.

One of the asylum patients believes he is Einstein, another Isaac Newton. A third, Johann Wilhelm Mobius (a real-life historical physicist), communicates with King Solomon. Without going into detail (sparing myself), their delusional states free them from prosecution after each one strangles a nurse. It doesn’t sound funny, but it is. Stranger still, each one’s philosophy, in opposition to the others, justifies his murderous act. 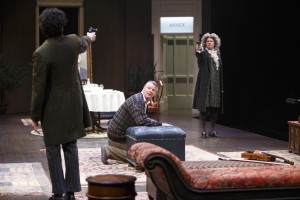 Headed by Geraint Wyn Davies and Seana McKenna as Mobius and the head nurse, the cast is uniformly excellent. As for the play itself, it not only poses the question Who are the real crazies? it suggests an answer as well. Not everyone will be pleased with that answer.

“Carousel” is Rodgers and Hammerstein’s crowning musical achievement. From the glorious “Carousel Waltz” overture, during which a working carousel replete with gleaming crystal horses takes shape, through the first act’s musical riches (“If I Loved You,” “June is Bustin’ Out all Over” and others), up to the hopeful ending, the show is sung and danced to perfection. True, the undercurrent of domestic abuse (“…hits that don’t hurt”) is off-putting today, but that was then (1945) and to their credit, Stratford does not tone it down.

What I love about “The Taming of the Shrew,” the love-hate byplay between Petruchio and Kate, has never been better played. Ben Carlson and Deborah Hay are as much a heaven-made match as their characters. What is less enthralling, the Bianca-and-suitors sub-plot, has always seemed to me to be a distraction. It’s certainly well played here, but that impression remains.

There’s nothing new to say about “The Sound of Music”. Audiences love it, and why not? Nuns, children and the triumph of decent Austrians over nasty Nazis. Cast with excellent actors who sing quite well (the reverse of “Carousel”), the play still seems bloodless. Best here are the seven von Trapp children, although them singing in front of large, scary Nazi flags is ________ (fill in the blank). And Ben Carlson looks about as pleased to be playing Captain von Trapp as Christopher Plummer was in the movie.

The Stratford season runs through October. Among other plays in the repertory are “Love’s Labours Lost,” “She Stoops to Conquer” and “Diary of Anne Frank”. For a comprehensive booklet with schedule and other info (lodging, etc.): 800-567-1600 or online at www.strafordfestival.ca