Rock of (Teen) Ages: “Be More Chill” in Red Bank

The new-ness of new plays must be factored into their evaluations. Often over-long and repetitious and occasionally derivative of other, established works, new plays profit from “tryout” productions. So it is with the world premiere of “Be More Chill” at Two River Theater, where those kinks will likely be worked out.

Commissioned by Two River in 2012, a process akin to an author’s advance, creators Joe Iconis (music/lyrics) and Joe Tracz (book) have adapted the late Ned Vizzini’s YA novel into a stage musical.

“Be More Chill” is an updated delivery of the well-worn youth-directed mantra “just be yourself.” After ingesting a supercomputer chip (a “squip”), high school misfit Jeremy (Will Connolly) is transformed into a cool dude (and chick magnet). The Squip assumes human form (Eric William Morris), visible only to Jeremy (and us), to guide the lad through the labyrinth of his new persona. 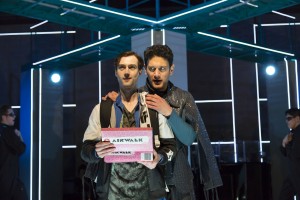 Under the spell of his demanding avatar, newly-hip Jeremy rejects his only friend Michael (George Salazar) and is pursued by hotties Chloe (Katlyn Carlson) and Brooke (Lauren Marcus). Rejecting their candid propositions (what hath high school wrought?), he courts the unattainable Christine (Stephanie Hsu) by, among other tactics, appearing in the school play, “A Midsummer Night’s Madness with a Donkey.” (Christine to teacher: Don’t you believe in Shakespeare? Teacher: He’s dead. Let it go.)

The show has a split personality. Act one (of two) is a coherent laying out of the plot and characters, propelled nicely by the better half of the musical score. “More Than Survive” makes the case for Jeremy’s frustration (not a DeNiro, Joe Pesci will do), and the outstanding Ms. Hsu, as delightfully free-wheeling a performer as you’re apt to see, makes “I Love Play Rehearsal” a show-stopper, with Iconis’s terrific lyrics a full partner. Chase Brock’s spirited choreography also energizes the first act.

Jeremy (Will Connolly) and his main crush Christine (Stephanie Hsu)

There’s little left to explore by the second, which seems hap-hazard, both in Stephen Brackett’s direction and cast execution. Even the vibrant six-piece band, led by musical director Nathan Dame, sheds its first-act discipline in favor of volume. A Hallowe’en party scene is creatively costumed (by Bobby Frederick Tilley II), but goes on too long and includes the unappealing lyric of “Michael in the Bathroom.”

Will the Squip get his comeuppance when Jeremy finally accepts the “normal” voices in his head? Will Jeremy and Michael’s friendship pick up where it left off? Will Jeremy and Christine end up in a clinch (however chaste)? Will Jeremy’s dad put on his pants? Yes to all, but you had them figured out by intermission. New doesn’t necessarily mean original. There is, however, enough rockin’ out in “Be More Chill” to please its target audience. So bring your 13-and-up teens. Better yet, drop them off and pick them up after.