It’s hard to believe that “Your Blues Ain’t Sweet like Mine” was Ruben Santiago-Hudson’s first full length multi-character play. (His Obie-winning “Lackawanna Blues” was a solo show.) Line-by-line and scene-by-scene, “Blues” rivals that of many an experienced playwright’s best work. How fortunate for Two River Theater (in Red Bank, NJ) that their two-time director (August Wilson’s “Jitney” and “Two Trains Running”) chose the same venue for the world premiere of his auspicious play-writing debut.

When dealing with African-American resentment, “Your Blues Ain’t Sweet like Mine” is as subtle as a thunderstorm. (White privilege is “the longest ass-whuppin’ in the history of civilization.”) Set in 2002, the play begins with a deceptively civil exchange between Zeke (Brandon J. Dirden), a Black pick-up man for a used-clothing charity, and Judith (Merritt Janson), a white donor, in her upscale NYC apartment. At a subsequent dinner party, a racially-charged debate boils over into alienation and even a physical altercation. 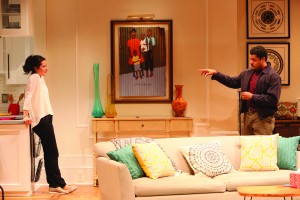 Judith’s dinner invitation (“Why did you invite me into your home?”) is explained by her writing project: a New York Times Magazine article about black under-achievers, as she had him correctly pegged. Their first scene, beautifully written and highlighted by a brilliant riff on white vs. Black jazz artists, smolders with mutual attraction, though they touch only once – fleetingly, but tellingly.

When other dinner guests cancel, the event becomes a sort of awkward double date, pairing Judith with her white fiancé Randall (Andrew Hovelson) and Zeke, by default, with Judith’s Black friend Janeece (Roslyn Ruff).  Janeece is put off by Zeke’s hostility, and Randall’s liberalism has a false bottom. (Which reminds me to mention the women’s delicious hip-hop routine.) Randall, upon being told that the appellation African-American is preferable to Black: “It’s too much to say.” Amusing enough in context, but racist? You decide. 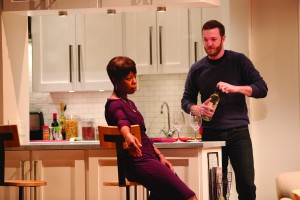 The acting in the pivotal dinner scene (and throughout), scrupulously directed by the author, is nigh perfect. From Zeke’s attention-grabbing entrance, through the ensuing confrontation, up to exits that leave Janeece pondering what had just happened, the four enact a forceful mini-epic. (Not without some laughs, if you can believe.) Dirden’s Zeke may be the centerpiece, but this fine-tuned foursome, working so well together, is uncommonly good.

The play ends in a change of scene, to the unusual living quarters of Mr. Zebedee, an elderly Black man with a harrowing past and a guilty secret.

“Your Blues Ain’t Sweet like Mine” is an impressive achievement. Highly entertaining, it also questions the beliefs and sensibilities of whites and African-Americans alike, not preaching, pandering, or providing easy answers. Through Zebedee’s final monologue, Santiago-Hudson offers a hopeful conclusion. Assuming that is his intention, it is Mission Accomplished.