Math not for dummies: “Proof” in Holmdel

Holmdel Theatre Company’s performance space is the quintessential “black box”. For the uninitiated, the reference is not to flight recorders so much in the recent news. Theatrical black boxes are four-wall, flat-floor areas that can be configured any-which-way, depending upon the nature and artistic vision of any given presentation.

No company makes more varied or more appropriate use of a black box than does Holmdel. In recent years there was a traditional face-front “Musical of Musicals,” an “Our Town” in three-quarter round, “Rounding Third,” where the audience was on a virtual baseball practice field, and “Noises Off,” with an innovation perfectly suited to the space. Now they have moveable stadium-seat sections that can be locked into place anywhere in the box – or, for that matter, outside the box. (Can an open-air production be far behind?)

Amanda Deltuvia as Catherine and John Bergeron (Hal) in “Proof”

For “Proof,” the audience is in an arc facing the back porch of a rundown house, where 25-year old Catherine (Amanda Deltuvia) had cared for her father (Eric Rolland), a renowned Chicago University mathematician, while he declined into dementia. After his death, Hal (John Bergeron), a former student, shows up to sort through the once prolific professor’s notebooks, and Catherine’s sister Claire (Colleen Clinton) arrives from NYC to take charge of the funeral, of the house and, she presumes, of Catherine, who fears she’s going “bughouse” like her father.

David Auburn’s rare blend of drama and mystery with a dash of comedy won the Best Play Tony Award as well as the Pulitzer Prize in 2001. The genius aspect of the play lies in its 50-50 split between character study and plot intrigue. The elements feed off one another. Dysfunctional family issues and Catherine’s fragile emotional state are exacerbated by the discovery among the professor’s notebooks of a mathematical proof once considered impossible. 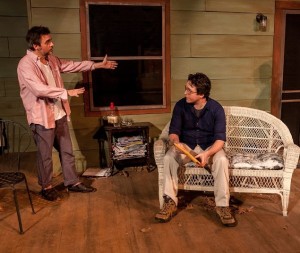 Under Kathy Hendrickson’s introspective direction, the play’s personal relationships are primary. The story is intact, of course, but plot points and inherently dramatic moments are secondary to character analyses, some of which feel like actors’ scene studies – and quiet ones at that. Over-emphasizing obvious points is condescending to audiences, but under-emphasizing deprives audiences of built-in Aha! moments.

To that end, most of the acting is low-key naturalism. Deltuvia’s Catherine is discovered in a depressed funk, from which she emerges to some extent after a potentially mood-elevating encounter and a major revelation. Hal is torn between loyalty to Catherine and his own math-science instincts. Bergeron plays the young man’s doubts and his intellect very well. (The proof is discussed such that higher-math proficiency is not an audience requirement. Thank goodness.)

Claire and Catherine could not be more different. Catherine should break your heart, while her icy older sister, in Clinton’s playing, engenders no sympathy. (She’s not supposed to.) Dad, appearing in flashbacks, goes in and out of lucidity; Rolland avoids overdoing either mental state. (Clinton and Rolland are Actors Equity Association members.)

Next up at Holmdel, this summer, is “Twelfth Night,” which, considering that Shakespeare’s Globe Theatre was an unadorned stage, is well suited to the black-box concept. (It was also an outdoor venue…hmmm…)