(In somewhat of a departure, this piece is more local bio than review. It also appears in the Red Bank, NJ weekly Two River Times and is shared here because…well, why not?)

Red Bank NJ born-and-bred Greg Schweers, now a resident with his wife and eight-year-old daughter of neighboring Little Silver, has transitioned from being a real-life County Prosecutor to creating and portraying one on stage. Acting on the literary maxim “write what you know,” prosecutor Schweers retired and became playwright Schweers. “Disorderly Conduct,” his first full-length play, recently completed its maiden run at Spring Lake NJ Community Theatre. 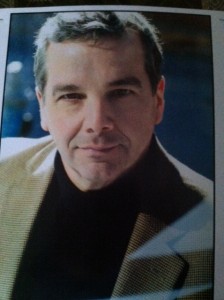 One of six siblings, three boys and three girls (“…like the Brady Bunch,” he notes), Greg graduated from St. James Grammar School and Red Bank Catholic High before going on to Seton Hall University, where he earned his Law Degree in 1987. After clerking with the Monmouth County NJ Prosecutor, he was hired as an Essex County Assistant Prosecutor. Three years later, he was back in Monmouth County, this time as an Assistant Prosecutor.

After serving in the Sex Crimes/Child Abuse Unit, he was named Director of the Professional Responsibility Unit, investigating allegations of criminal conduct by police officers. After 25 years in all, he retired in 2012. Through much of that span, Greg made time to scratch his acting itch, performing with both Premier and Phoenix companies and with the Billy VanZandt/Jane Millmore zanies.

Since the 1990s his most enduring theater base has been in Spring Lake, where he’s played John Adams in “1776,” Nathan Detroit in “Guys and Dolls” and, for the last three years, the title role in their annual high-demand December musical “Scrooge.” Acting is a rewarding pastime, according to Greg, but, he says, “I always wanted to write a play.”

The idea for “”Disorderly Conduct” took shape at a 2011 prosecutors convention in Atlantic City and after retiring, Schweers completed the play in “a few months.” You’d think his history would slant his play-writing efforts toward “Law and Order” or “CSI” themes, but no; “Disorderly Conduct” is a formula farce whose only serious aspect is its quest for laughs. 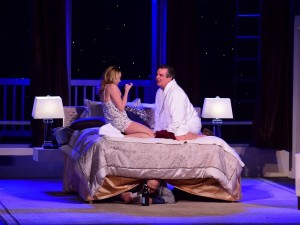 The secretary (Krissy Sliwoski) and the prosecutor (Gregg Schweers) about to get it on while the hit man (Sal Giacchi) lurks under the bed. (Where else?)

In the play (seen Feb. 13), prosecutor Larry Veal, played by Schweers, is targeted by a mafia don under investigation. Holed up in an Atlantic City hotel suite for an assignation with his secretary (irresistible Krissy Sliwoski), Veal instead finds himself dodging his karate-krazed wife (high-energy Nicole Grassano) and the determined hit man (ace character actor Sal Giacchi). Veal’s re-appointment by the Governor (Chris Christie lookalike Ian Kearns), whose own tipsy wife (comically sharp Carole Darche) ends up on the luggage cart, is no sure thing – at least not until the twisty-turny plot is resolved. 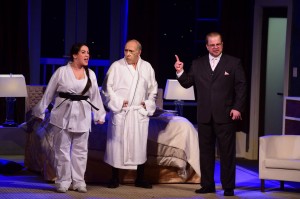 The play is a respectable initial effort. Like many new works, it’s overlong. There’s some repetition, a few comic bits extend past their natural endings (and I’m no fan of fat-person gags), but there’s no denying that “Disorderly Conduct” is already a crowd-pleaser. In one exchange that’s a pip, the hotel manager (Steve Bartlow) mistakes the hit man for the prosecutor. “I’m a fan of what you do,” he says. “You know what I do?” is Giacchi’s perfect double-take reply.

Schweers is already at work on revisions. Just as he was a detail-oriented prosecutor, he’s the same as a playwright. “When the re-writes are done,” he said, “I’d like to submit it for publication.” Eventual publication and ensuing productions should surprise no one.