Brilliance is in the eye of the beholder…

There’s an acting-class exercise where someone suggests a line and others improvise a conversation that ends with that line. One I recall: “So it’s settled; we’ll call the band Three Dog Night.”

I’ve been trying to imagine a conversation ending with “It’ll be about my mother’s suicide attempt when I was seven and the list of life-affirming items I devised, which I’ll pass out among the audience to read aloud when prompted, after I’ve drafted some to play other characters, including a therapist, who’ll take off her footwear to make a sock puppet.

Apparently based in reality, “Every Brilliant Thing” was written by Duncan Macmillan ‘with’ Jonny Donahoe, who is its solo-actor. The seven-year-old’s list of “everything brilliant in the world” was begun to bring cheer to his suicidal mother. The list becomes a life-long project, if not obsession, stretching to nearly a million entries. 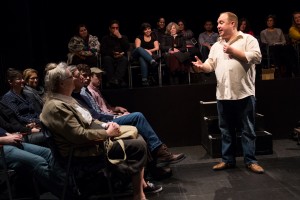 Jonny Donahoe interacts with his “Every Brilliant Thing” audience

Donahoe relates the tale respectfully, and also quite humorously, both in content and audience byplay, at which he’s a master. But his advice to anyone contemplating suicide, “Don’t do it,” and the aphoristic “If you reach old age without ever being crushingly depressed, you haven’t been paying attention” are hardly original.

Flanked on four sides by the audience, Donahoe is in constant multi-directional mode, which results in variable clarity, a problem exacerbated by some audience members mumbling their assignments. Couldn’t director George Perrin have foreseen that problem?

Among the responses called out were “people falling down,” “Christopher Walken’s hair” and “completing a task.” Fans of audience participation will likely enjoy “Every Brilliant Thing.” My assignment, btw, was “conversation.” I guess it depends with whom.
Through March 29 at Barrow Street Theatre, 27 Barrow Street (at 7th Avenue), NYC. Tickets: www.smarttix.com

Ivan Turgenev’s “A Month in the Country” is often referred to as Chekhovian, although it was written in 1850, a full decade before Chekhov was even born (and first performed when Vanya’s creator was twelve). While some of the two playwrights’ characters are spiritual cousins, Turgenev’s express themselves in far fewer words.

Except for a half-dozen extended monologues, “A Month in the Country” speeches rarely exceed a couple of sentences. Illuminating emotion and motivation is Acting 101, but such a spare style intensifies the challenge, which is met with general success at Classic Stage Company.

The play centers on 29-year old Natalya’s infatuation with her ten-year old son’s tutor, 21, who is blissfully unaware of her longing and that of Vera, Natalya’s 17-year old ward. (Turgenev specified the ages.) Natalya’s preoccupied husband figures in, as does his mother and her woman-friend. There’s also a distinctly unappealing (but rich) neighbor, who, at 48, is seen by the jealous Natalya (but surely not by anyone in the audience) as a suitable husband for Vera. 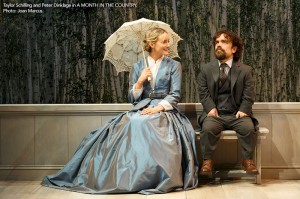 As Natalya, Taylor Schilling is ravishing in gowns of robin’s-egg blue, sunburst yellow and shimmering white. Natalya is conflicted over feelings that she can neither deny nor express, and the “Orange Is the New Black” star fills in all the unspoken nuances in her New York stage debut. Less effective is Peter Dinklage as Rakitin, hopelessly enamored of Natalya. His Rakitin emerges as little more than a hanger-on.

Mike Faist is a charisma-challenged tutor. One can hardly imagine Ms. Schilling’s Natalya or Megan West’s glowing Vera falling for this guy. The others, aided by Tom Broecker’s period-perfect costumes, contribute nicely to the tone and style of the play.

Director Erica Schmidt’s concept is in keeping with the languorous manner in which the upper-class characters pass the time. John Christopher Jones’s translation doesn’t embellish, the better to savor Turgenev’s carefully formed short exchanges, written and delivered at his characters’ intentionally unhurried pace. 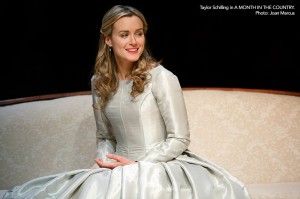 Between this play and “Fathers and Sons,” Turgenev is the most revived Russian playwright after Chekhov. Even so, “A Month in the Country” is not an everyday offering. Students of the genre are well advised to catch this highly respectable production, highlighted by Taylor Schilling’s marvelous performance. It’s a brilliant thing.