Four different productions of “King Lear” were among 113 plays seen in 2014. The first, and longest at three hours-plus, was the Royal Shakespeare Company’s Michael Pennington at the Polonsky Shakespeare Center in Brooklyn. Pennington was an intense Lear, if low key, and dragging (rather than carrying) Cordelia’s body in at the end was a strange touch.

Colm Feore’s magnificent Lear at Ontario’s Stratford Festival was the most emotionally involving one I’ve seen. “Wipe thine eyes,” Lear advises Cordelia (Sara Farb) as they reconcile near the end – advice heeded by every sniffler in the house, me included. 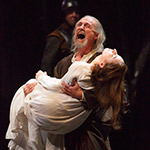 John Lithgow’s take on Lear at The Public in Central Park was like a primer. Crystal clear, textbook readings can be a good thing, of course, especially for newcomers to the work, but it came at the expense of the play’s humanity.

My reason for attending the fourth was to attend a fourth. I’d triple-headed several Shakespeares in one year before (“Romeo & Juliet” as recently as 2013), but never four. The Shakespeare’s Globe production at NYU’s Skirball Center was performed by a cast of eight. The congenial Lear actor (Joseph Marcell) roamed the aisles chatting up patrons before the play, and one actress doubled as Cordelia and The Fool. Why not? Cordelia enters and leaves in Act 1, scene 1; Fool enters in 1.4 and is written out in 3.6; Cordelia re-appears in 4.4 to the end. It worked fine; Bethan Cullinane was excellent as both.

Three Hollywood leading men gave outstanding dramatic performances on Broadway in 2014. Hugh Jackman’s understated The Man in Jez Butterworth’s haunting “The River,” running to Jan. 25, is a departure from his expansive roles. The play is highly symbolic, and Jackman, especially in two prolonged monologues and the detailed gutting, preparing and serving of a freshly caught trout, is mesmerizing.

Daniel Radcliffe and Bradley Cooper played characters with physical deformities, the former in the surprisingly funny “The Cripple of Inishman,” now closed, and the latter as “The Elephant Man” (closes Feb. 15), in which Cooper embodies grotesquery with a remarkable slo-mo distortion of his own perfect physique. Bernard Pomerance’s play is a bit of a bore, but Cooper is terrific. 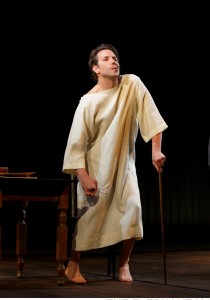 Bradley Cooper as “The Elephant Man”

In Martin McDonagh’s “Inishman,” a young fellow with a gnarled leg and foot auditions for a movie being filmed on a nearby island. Cripplebilly, as he’s called by everyone, reaches his breaking point after being blindsided by reality, but when pretty Helen finally addresses him as Billy, in one of the most satisfying stage moments ever, his despair turns at least bittersweet. Radcliffe caught every nuance.

Two Monmouth County, NJ professional theater companies are off and running already in the new year. New Jersey Repertory Company, whose specialty is introducing new plays, is presenting the American premiere of a play about a real-life socialite, while Two River Theater Company continues to expand its wide-ranging repertoire with a 1972 comedy by the most prolific playwright of the last 50 years.

NJ Rep’s “Swimming at the Ritz” is based on events in the life of Pamela Churchill Hayward Harriman, whom President Bill Clinton appointed as Ambassador to France in 1993. Charles Leipart’s two character play is a humorously poignant reconstruction of Harriman’s later life (she died in 1997), when family and financial problems overshadowed her accomplishments. 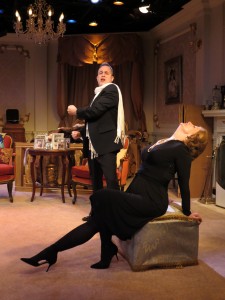 Judith Hawking and Christopher Daftsios at “…The Ritz”

In the play, Pamela regales a young Italian valet at her Paris hotel, with tales from her life, including marriages to Randolph Churchill (Winston’s son), who proposed the evening they met, then to Broadway producer Leland Hayward on the day after his divorce, and to railroad heir W. Averell Harriman, who had been Governor of New York and President Truman’s Secretary of Commerce. It’s safe to assume there’s enough material for a play!

Now in previews for a January 16 opening at Two River Theater, “Absurd Person Singular” is one of prolific Alan Ayckbourn’s most successful comedies. How prolific? The author of some 80 plays (and counting), Ayckbourn is said to be the second most widely produced playwright in recent years, behind only the Elizabethan guy who wrote half as many plays. 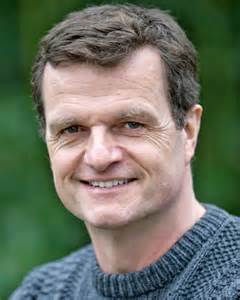 Ayckbourn is also known for unique settings. (His “House and Garden,” for instance, is two plays being performed simultaneously.) “Absurd Person Singular” takes place on three successive Christmas Eves, documenting the entanglements of three married couples who gather each year at a different one of their homes to celebrate the holiday. Their Christmases are not all merry and bright – except in the laugh department. 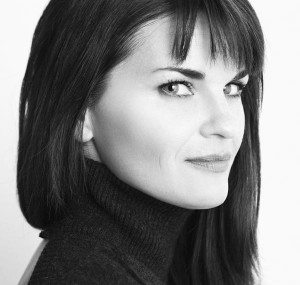