“Much Ado” about the other guys – including an “Elf”

“Much Ado About Nothing” revolves around young lovers Claudio and Hero’s rocky path to happily-ever-after, but the play is generally a showcase for the roles of Beatrice and Benedick, a bickering couple favored with some of Shakespeare’s wittiest banter. In every “Much Ado” I’d seen before last week, Bea and Ben were central.

Not so at the Shakespeare Theatre of New Jersey. Intended or not, their “Much Ado,” directed by Scott Wentworth, points up how clearly the play centers on the Claudio-Hero situation.

Shakespeare set the play in 1600 Sicily. Here, it’s at Christmas-time during World War II, framed as a dogface GI’s dream. Army Officers Benedick (Wentworth) and Claudio (Charles Pasternak) are among the guests at the home of Governor Leonato (a stately Raphael Nash Thompson), whose niece Beatrice (Marion Adler) and daughter Hero (Susan Maris) become the objects of the men’s attentions.

To be sure, Beatrice and Benedick are older than Claudio and Hero, but Adler and Wentworth could well be their parents, and while she flutters in the manner of a society hostess, he’s woefully dour through much of the play. Possibly due to his distractions as director, the two actors, married in real life, fail to ignite on stage.

Pasternak and Maris are an ideal Claudio and Hero. He’s openly smitten, and who wouldn’t be, basking in the glow of her virtuous ardor. Their would-be wedding, where he unjustly rails against her and she topples like a wounded bird, is this production’s best all-round scene. 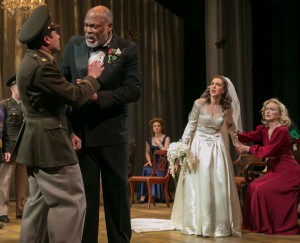 Michael Ganio’s minimal scenic design is adorned with Christmassy accessories, and Candida Nichols’ costumes evoke the 1940s. The women’s cocktail outfits are particularly attractive. The military men look sharp in their dress uniforms, although pushed-back headgear is a military no-no (as is being “covered” indoors).

Clocking in at two-and-a-half hours including intermission, the play is well paced, and setting it at Christmastime does it no harm. With its emphasis on the young lovers and its expertly played low comedy scenes, this “Much Ado” is ideal holiday entertainment. (Bring the kids age eight and up.)
Through Dec 28 at Shakespeare Theatre of NJ, Madison NJ. Performances Tues-Sun. For schedule and tickets ($32-$62): 973-408-5600 or online at www.shakespearenj.org

Buddy, one of Santa’s elves, learns that he is human and sets off for NYC to meet his father, who turns out to be a holiday humbug. But guess what: Buddy spreads enough holiday cheer to convert him – and every cynic in the audience – into believers (in Santa, that is; this is not about the Birthday Boy.)

Buddy’s musical family-tree includes Broadway veterans Robert Cuccioli (“Jekyll and Hyde” for starters) and Heidi Blickenstaff (“The Addams Family” and more) as Buddy’s dad Walter and stepmom Emily, and Jake Faragalli, talented beyond his years, as Buddy’s younger half-brother Michael. The Emily-Michael duets (“I’ll Believe in Him” and “There Is a Santa Clause”) are highlights. The fetching Kate Fahrner is Jovie, Buddy’s girlfriend, whose “Never Fall In Love (with an elf)” is poignant and amusing all at once. 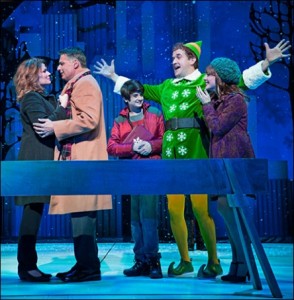 A cheery ensemble sings and dances with holiday enthusiasm, and if there’s a more realistic Santa than Paul C. Vogt, he’s programming his sleigh’s GPS right now.
All this is not to sell James Moye short. He’s up against the Will Ferrell image, after all, and surrounded here with a top-notch ensemble of pros’ pros, he’s a thoroughly likeable Elf.