The review that goes like this: “Spamalot” will brighten your life!

In order to pull off “Monty Python’s Spamalot,” you need a dozen uninhibited character actors, that many ensemble singers and dancers, some leggy chorus cuties who can change costumes in seconds and look sexy in every one of them and, ideally, a brassy orchestra. All those elements are accounted for at the Count Basie Theatre in Red Bank.

But like a complex recipe, a skilled chef is required to create a satisfying dish. Fortunately, Phoenix Productions turned the ingredients over to director Gary Shaffer, who blended them into a delicious confection. Shaffer’s specialty is inspired nonsense; he and “Spamalot” were made for each other.

Don’t expect a re-cap of the show by Eric Idle (book and lyrics) and John Du Prez and Idle (music). The story, nominally about King Arthur and his Knights’ quest for the Holy Grail, veers into too many directions, each one zanier than the last. With a character named Not Dead Fred and musical numbers likes “Fisch Schlapping Song” (don’t even ask) and “I Am Not Dead Yet,” sung, as you might expect, by Not Dead Fred, just sit back and laugh.

Familiarity with the movie “Monty Python and the Holy Grail,” from which the musical is “lovingly ripped off,” does enhance enjoyment, but it’s not necessary. Monty Python newbies might not dig the Knights of Ni, especially over-amplified, but many bits from the movie – the vicious bunny rabbit, for one – are funny enough on their own.

If there really was an addle-brained King Arthur, he’d have looked and sounded like Michael Chartier. Entering on horseback (sort of) to the clop-clop of astonishingly realistic hoof beats (“What horse? You’re banging coconuts together!”), Chartier captures Arthur’s pomposity to a tee…and sings his numbers with booming authority.

As The Lady of the Lake, only mentioned in the movie, Christine Paccillo makes the most of her, um, natural assets and spoofs musical theater with “The Diva’s Lament,” about being shunted offstage, and “The Song That Goes Like This,” a duet with Mike Patierno, first-rate as Sir Galahad, whose full name is Dennis Galahad. (Who knew?)

Among the character sendups, none is more fun than Patsy, Arthur’s lackey, played by Casey Okamoto as a sort of British Japanese American Buster Keaton. (The ethnic mix is from his bio; the Keaton reference is mine.) Okamoto anchors “Always Look on the Bright Side of Life,” which you will sing during the curtain call. 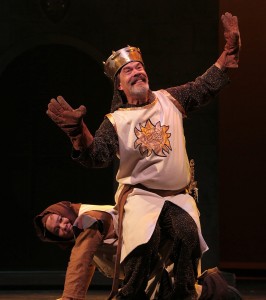 Other standouts include show-biz savvy Anthony Preuster as show-biz savvy Sir Robin. His un-PC number “You Won’t Succeed on Broadway (if you don’t have any Jews)” is a show-stopper. Prince Herbert and Sir Lancelot’s ‘controversial’ relationship is amusingly acted by AJ Melnick and Michael McEntee. The walk-on role of Sir Not Appearing is played by Bob Steiner, whose bio notes that he lost his vision last year. Punning on the role and the disability might draw protests, so we’ll just credit Phoenix for, in Steiner’s words, giving him hope.

A third “Spamalot” pic. Why not?

Through Nov. 23 at Count Basie Theatre, Red Bank. Fri and Sat at 8pm; Sun at 3. Info and tickets ($22-$32) at the Basie box office or online at www.phoenixredbank.com

P.S. Do not fail to read about the Finnish musical in the front of the program, which includes a suggestion to visit Finland, where things are very clean, but not pathologically so.