PAIR-A-GRAFS: Short takes on several shows (two paragraphs each, get it?)

The Playbill bios for the two “On the Town” leads could not be more dissimilar. Megan Fairchild is a principal dancer with New York City Ballet whose credits include leading roles in George Balanchine, Jerome Robbins and Peter Martins creations. “On the Town” is her musical comedy debut. Opposite her, Tony Yazbeck’s Broadway credits include leads in “Chicago” and “Irving Berlin’s White Christmas” as well as the role of Tulsa (“All I Need Is the Girl”), which he aced in the 2008 revival of “Gypsy” (Patti Lupone). 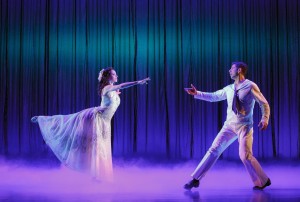 The two outstanding performers meet in the middle, so to speak, in “On the Town.” Each of them feeds the other a generous portion of their discrete expertise, and the result is magical. From comically antic through interpretive jazz to the lush dream ballet, they are, hands down, the best song-and-dance team on Broadway. Leonard Bernstein’s exquisite score (“NewYork, New York (a helluva town”) and a thirty-piece orchestra playing it don’t exactly inhibit their efforts.
Lyric Theatre, 42nd Street just west of 7th Ave. Info/Tix: 877-250-2929 or at onthetownbroadway.com

…AND AROUND THE CORNER

Something very special is happening on West 43rd Street. American poet Emily Elizabeth Dickinson, reclusive during her lifetime (1830-1886), is opening up to a select group, sharing her thoughts, dreams and snippets of her poetry in the person of Joely Richardson. You are encouraged to join that group at a performance of “The Belle of Amherst.” Largely unpublished during her lifetime, it was 1955 before the prolific poet’s output was published as written. In 1976, William Luce wrote the one-woman play for Julie Harris, who went on to play it off-and-on for many years. Ms. Richardson honors the legacies of Ms. Harris and Emily Dickinson with a stunning performance. 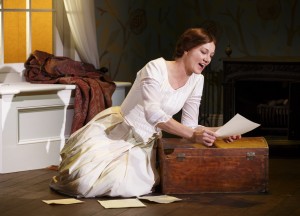 Mr. Luce specializes in one-person plays based on real people, among them Charlotte Bronte and John Barrymore. I hope that he, now 83, is able to see Joely Richardson, whose seamless meshing of his words with aptly quoted portions of Dickinson’s verse re-establish the play as a work of creative genius. Ms. Richardson is mesmerizing. (Equally enthralling to me was eavesdropping on the post-show conversation she had with a bus-tour group from the Dickinson Museum in Amherst. Joely is as charming as is her Emily.) 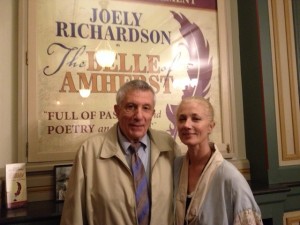 That’s me with the lovely and gracious star

…AND DOWNTOWN
What was it about “pool (no water)” that brought “Avenue Q” to mind? Certainly not the five actors, who are hardly puppets. No; it’s the “Avenue Q” song “Schadenfreude,” referring to the rush of satisfaction one experiences over the misfortune of another. That guilt-inducing sensation haunts the struggling artists of “pool (no water)”, whose more successful friend suffers a life-threatening accident, detailed concisely in the play’s title.

Jealousy, back-biting and opportunism are hardly limited to the arts, or, for that matter, to art about the arts. Mark Ravenhill’s play puts an exclamation point on those all-too-human shortcomings. The “pool” characters are not particularly likable, but the five ardent, committed performers are. (The show, which clocks in at an hour, would profit from an additional five minutes running time. Some of the rat-a-tat delivery strains comprehension.) 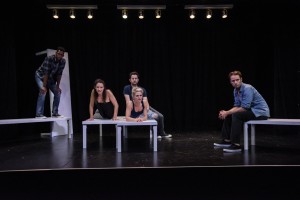