A Slimmed-down “Camelot” in Red Bank

Last year Two River Theater Company presented a semi-staged version of “The Music Man” with a cast of eleven and seven musicians. Now they’re doing a scaled-down “Camelot” with eight and eight, which, considering the result, is enough. Referring to Camelot as “a fleeting wisp of glory” has never been more apt.

Condensing book-heavy musicals while preserving the musical numbers can be a win-win – for audiences as well as a theater’s bottom line. Based on “The Once and Future King,” T. H. White’s tale of the King Arthur legend, the over-stuffed “Camelot” is the perfect candidate. That the estates of Alan Jay Lerner (book and lyrics) and Frederick Loewe (music) signed off on the concept is a tribute to their artistic vision.

At three hours with a cast of 30, “Camelot” combines a classic love triangle with political intrigue wrapped around a glorious musical score. At two-hours-fifteen with a cast of eight it still does. The timeless story has Arthur (Oliver Thornton) nervously awaiting his arranged bride Guenevere (Britney Coleman). They fall in love, marry and, inspired by “Genny,” Arthur creates the chivalrous order of Knights. (Genny’s father has a large round table that he never uses.)

The idyll is shattered when Genny and the flawless Lancelot (Nicholas Rodriguez) lock eyes, cracking Camelot’s armor. The order of the Round Table collapses in treachery and violence, spurred on by Arthur’s bastard son Mordred, played with relish by Hunter Ryan Herdlicka. (“You’re not the first king to have one of those things running around,” Genny assures Arthur.)

I was initially dubious. With younger-than-usual principals in rehearsal clothes on a multi-level, wooden-frame set, there was a high school look about the production. But by the time Guenevere and three burly knights, amusing substitutes for ladies-in-waiting, celebrated “The Lusty Month of May,” I was won over.

As those knights, Ryan G. Duncan, Kent Overshown and Perry Sook do some heavy lifting. They fill in for missing characters of both sexes and both good and evil intent. Their exceptional talents are key to the show’s continuity. “Fie on Goodness” is as much choral resonance as you could ask for. (A fourth knight, versatile Parker Slaybaugh, puts a cap on the play as young Tom.) 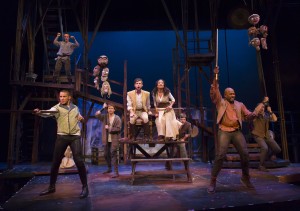 Choosing between Thornton’s Arthur and Rodriguez’s Lancelot would be a problem for any woman. Both handsome fellows, Thornton grows into the regal role, and Rodriguez is a baritone to contend with. “C’est Moi” establishes Lance’s self-importance and “If Ever I Would Leave You” is a reminder of how grand that song is.

Falling for Britney Coleman’s Guenevere is no contest. With the poise of an objet d’art and an expressive face that’s a window into Genny’s soul, she’s also a sparkling singer. Pining for “The Simple Joys of Maidenhood,” vamping the knights with “You May Take Me to the Fair” and lamenting emotional upheaval with the haunting “I Loved You Once in Silence,” Ms. Coleman is a kingdom-worthy Guenevere.

Presumably (there’s no program credit), director David Lee had a hand in the condensing, which successfully distills the play’s essence without diluting it. He also manages the cast’s doubling/tripling skillfully, while musical director Steve Orich’s re-orchestrations are exactly to scale.

This might not be your parents’ “Camelot,” but it is one you may want to share with their grandchildren.