“I LOVED, LOVED it,” a friend e-mailed after we saw “You Can’t Take It With You.” Me too. Moss Hart and George S. Kaufman’s 1936 Pulitzer-winning play is a thorough delight. The Sycamore family at its center is irresistible and the revival currently gracing Broadway’s Longacre Theatre is superbly performed. What’s not to LOVE?

Framed against the backdrop of the Great Depression, “You Can’t Take It With You” is as welcome a diversion now as it must have been then. Imagine a supportive extended family living under one roof, accepting without a trace of irritation one another’s oddest quirks and habits. Where have you gone, non-judgmental? 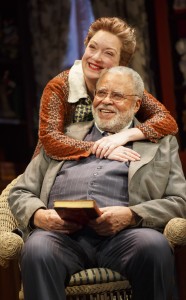 How odd are they? How quirky? Grandpa (James Earl Jones) stopped working years ago in favor of attending random school commencements. Mrs. Sycamore (Kristine Nielsen) writes plays because a typewriter had been mistakenly delivered to the house, while her husband Paul (Mark Linn-Baker) and Mr. DePinna (Patrick Kerr), a former ice deliveryman, manufacture fireworks in the basement.

Uninhibited granddaughter Essie (Annaleigh Ashford) is an interpretive ballerina in perpetual motion. Her husband Ed (Will Brill) plays the xylophone and sells candy-door-to-door. There are two servants who are as much family as the others, a Bolshevik ballet master, a Tsarist countess and an IRS agent for good measure. (Have I left anyone out? Oh yes, the passed-out actress on the sofa.)

Daughter Alice (Rose Byrne), the least eccentric of the lot, is in love with the son (Fran Kranz) of a conservative Wall Street banker, and when the families meet (at an hilariously ill-timed dinner party), the social fireworks rival the explosions in the basement.

The cast is impeccable. James Earl Jones is a Grandpa for the ages. Kristine Nielsen is the unrivaled empress of the double-take, and Ms. Byrne and Mr. Kranz create a couple that you just know will weather any storm. As for Essie: The phrase ‘steals the show’ might have been coined for the sublimely ethereal Ms. Ashford. 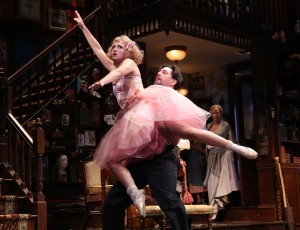 More so than many plays, the success of “You Can’t Take It With You” depends upon the characters maintaining their individuality while blending into a credible unit. This cast, guided by director Scott Ellis, could not have accomplished that any better.

The tolerance and affection among the Sycamores is contagious. The play’s entertainment value is a given, but it’s a rare theatrical experience that has the potential to make you a better person for seeing it. “You Can’t Take It With You” might be that play. Overstatement? Maybe. Or maybe not.

Based on four of its songs alone, Cole Porter’s “Can-Can” has been long overdue for revival. Well, its time has come, and the satisfying production at Paper Mill Playhouse, rumored to be pre-Broadway, proves that the musical riches in Porter’s 1953 musical are not limited to its core four: “I Love Paris,” “C’est Magnifique,” “Allez-Vous En” and the torchy “It’s All Right with Me.”

“I Am in Love,” “Come Along with Me” and even a throwaway like “Never Give Anything Away” join the ranks of the hummable, thanks to music director Steve Orich’s new arrangements and the vocal excellence of luminous Kate Baldwin and full-voiced Jason Danieley. 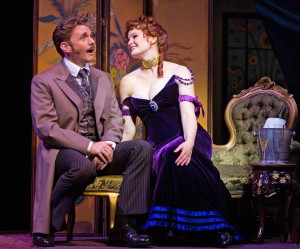 And as the title indicates, there’s that high-kicking, derriere-centric dance. A line of pulchritudinous chorines, inspired by Patti Colombo’s vibrant choreography, turn the Bal de Paradis night spot into the raciest entertainment destination in 1893 Paris, France – and certainly in 2014 Millburn, New Jersey.

When the highly moral judge Aristide Forestier (Mr. Danieley) investigates the scandalous Paradis, it’s only a matter of time (half-way through act one) before he and boite owner La Mome Pistache (Ms. Baldwin) are mutually smitten. But before the can-can dancers can bare their assets, morality rears up and Pistache and company are off to the lock-up. Can love and the bawdy can-can eventually co-exist? Well, there’d hardly be a show if not.

Sprightly as the songs and dance may be, the book portion, even as revised from Abe Burrows’ original by Joel Fields and director David Lee, is still creaky. A sub-plot, involving a second-rate sculptor, his dancer girlfriend and a pompous, on-the-make art critic, is mildly amusing, but the jokes are groaners and a climactic sword-duel wears out its welcome after a few of its too-many minutes.

The original “Can-Can” catapulted Gwen Verdon to stardom after her sexy “Garden of Eden” ballet stopped the show, for which, legend has it, she was fired at the behest of Lilo, the French chanteuse playing Pistache. There’s no chance of that happening at Paper Mill because as winning as Megan Sikora is in the same role, the ballet is cut.

Also among the missing is une atmosphere authentique Francais. While it is a genuine pleasure to hear “I Love Paris,” “C’est Magnifique” and “I Am in Love” sung gorgeously by Ms. Baldwin and Mr. Danieley, they are about as French as the crepes at Denny’s. It falls to the can-can to provide the Continental flair. I cannot swear to Gallic authenticity, but many an Oo-la-la was heard during the extended cheering for the sensational signature number. To Cole Porter, to Baldwin and Danieley and especially to those can-can girls, a toast: Bottoms up!