Don’t you just hate it when a good play – a classic, even – is spoiled by inferior acting? (Kelsey Grammer’s Scottish Play comes to mind.) I’ll take the converse anytime, like “Angels and Ministers of Grace,” for example. The fair-to-middling play, world premiering at New Jersey Repertory Company, is elevated by outstanding acting.

Elaine Smith’s first-ever fully-produced play isn’t a disaster – far from it. It just suffers from delusions of universality. Described as a portrait of “struggles that confront families today throughout the heartland and urban centers of America,” it is hardly that. The “Angels” family – two sisters, a brother and an ex-husband – could not be more particular to their rural northeast Florida confines, nor could their concerns be any more specific to them.

Siblings Miriam (Dana Benningfield), Arletta (Maureen Silliman) and Jimmy Ray (David Van Pelt), who own their inherited property with Miriam’s ex-husband I think (it’s not clear), face a litany of problems, among them the apparently (though undiagnosed) life-threatening illness of one of them, another’s tenuous grasp on reality and whether or not to sell the property. There’s also collective guilt over a tragic event in the past and the mystery of Miriam’s missing phone book. Meanwhile, Jimmy Ray has run over and killed an armadillo, and the vexing question of when he will milk the constantly mooing cow persists. These issues, understandably irksome to this clan, have yet to gain a foothold in our nation’s urban centers. 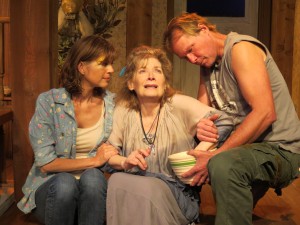 What does resonate universally is the bond between sisters, portrayed by Ms. Bennington and Ms. Silliman with exceptional warmth. Miriam, de facto head of the family, is a private woman who keeps her emotions in check until…well, no spoilers here. With the exception of some silly business with a shotgun, she remains rational, regardless of surrounding turmoil. Bennington acts her with appropriate restraint, all the while teasing with glimpses of Miriam’s vulnerability.

Arletta is the flashier role, and to her credit, Silliman resists the temptation to over-act the dotty woman. Surrounded by her hand-made angel figures, some cutesy and some grotesque (crafted by genius set-designer Jessica Parks with Donna Stiles and Sara Thomas), Arletta is in a spiritual world of her own. It’s tricky playing an alternate reality, but Silliman accomplishes just that, while also holding up her half of the sisterly bond.

Jimmy Ray is a cliché rural character, but Van Pelt’s demeanor and accent are not over-the-top; his Jimmy Ray is not a cartoon. Miriam’s ex-husband is a bad guy/good guy, and James Earley convinces on both ends, flaunting Frank’s happy re-marriage in Miriam’s face while also revealing underlying affection for her.

Marc Geller’s direction is fine. I suspect he trusted the two women’s instincts, a wise move that pays dividends.

The title derives from Hamlet’s prayerful exhortation upon seeing his father’s ghost (Act I, scene iv). The phrase also aptly describes producers Gabor and SuzAnne Barabas, who are true angels and ministers of grace to emerging playwrights such as Ms. Smith. Her first play, a work-in-progress, is benefitting from a first-class initial production at New Jersey Rep.