TONY TIME: Broadway honors its own…

The 68th annual American Theater Wing’s Tony Awards will be presented on Sunday evening June 8, telecast live, as usual, by CBS. Also as usual, there are some closely contested categories, but we’ll begin our annual predictions with a no-brainer.

Best Musical:  Fast-paced, laugh-filled and tuneful, “A Gentleman’s Guide to Love and Murder” appeals across the theatergoing spectrum, while each of its competitors is aimed toward a niche market. The Duke Ellington-scored “After Midnight” is essentially a revue; “Beautiful: the Carole King Musical” is a baby-boomer juke-box show (a fine one, to be sure); and Disney’s “Aladdin” is a live-action cartoon that won’t be touring any time soon. (A significant number of Tony voters are national tour operators.) “A Gentleman’s Guide” will dominate the musical field. 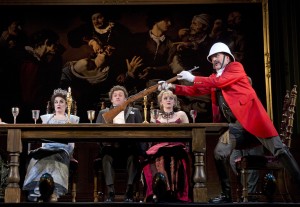 Best Play:  This is a two-horse race. Watching “All the Way,” about the lead-up to the passage of President Johnson’s 1964 Civil Rights Bill, is like being a fly on the wall in the Oval Office. “Act One,” adapted from legendary writer/director Moss Hart’s autobiography, is a strong contender, but propelled by Bryan Cranston’s splendid LBJ, “All the Way” should triumph. 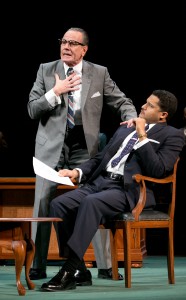 Bryan Cranston as LBJ and Brandon J. Dirden as Martin Luther King, Jr. in “All the Way”

Best Leading Actor in a Musical:  Jefferson Mays faces off against Neil Patrick Harris for this Tony. Mays is excellent in eight zany roles in “A Gentleman’s Guide,” and Harris amazes as the male-to-female sex-changed rock singer in “Hedwig and the Angry Inch.” (The title refers to his/her botched surgery.) This could go either way, but Harris’s TV popularity – and his having hosted the Tony telecast four times, including the last three – will tip the balance to him. 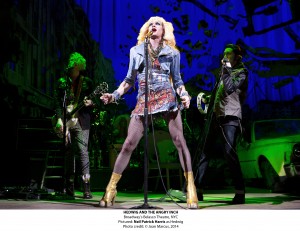 Neil Patrick Harris in “Hedwig and the Angry Inch”

Best Leading Actress in a Musical:  All five nominees are Tony-worthy. In “A Night with Janis Joplin,” Mary Bridget Davies channeled the singer to an eerie tee; Sutton Foster plays the facially disfigured “Violet” without a visible scar (they call it acting for a reason); and Idina Menzel raises the vocal roof in “If/Then.” Jessie Mueller is a ‘beautiful’ Carole King, and Kelli O’Hara’s sixth nomination, for “The Bridges of Madison County,” is well-deserved. While this could be Kelli’s first win, it should be Sutton’s third. (Or Jessie’s first or…okay, it’s a five-way guessing game.)

Best Leading Actor in a Play:  It’s either Bryan Cranston or Tony Shalhoub for this one. Shalhoub’s “Act One” triple-role feat is admirable, but as a tireless LBJ for nearly three hours, Cranston will go all the way.

Best Leading Actress in a Play (and Best Revival of a Play):  Two infamous Tony oversights have been addressed with the nominations of “The Glass Menagerie” for Revival of a Play and the production’s Amanda, Cherry Jones, for Leading Actress in a Play. Believe it or not, neither the play nor that role has been nominated in the play’s five previous Broadway revivals. (Its 1945 premiere was two years before the TonyAward was established). The recent production and Jones’s performance were widely praised, and although the limited run ended in January, both are sentimental favorites. 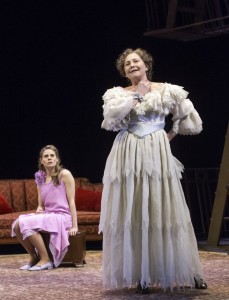 Best Musical Revival:  “Les Miz” is really a re-re-revival, and “Hedwig,” with the aforementioned Neil Patrick Harris headlining, is the favorite, but my choice would be the lesser-known, inspiring “Violet.” (Alas, critics have no Tony vote.)

Best Featured Actors and Actresses: In a Musical, Danny Burstein and Linda Emond complement each other perfectly as Herr Schulz and Frau Schneider in “Cabaret.” In a Play, bet on Mark Rylance in the all-male “Twelfth Night” (he played Olivia) and either (hedging again) Sophie Okonedo or Anika Noni Rose, who play Walter Younger’s (Denzel Washington) wife and sister in “Raisin in the Sun” (running through June 15).

Best Directors:  In the Play category it’s John Tiffany’s (“Glass Menagerie”) to lose with Tim Carroll (“Twelfth Night”) snapping at his heels. For the Musical, Darko Tresnjak is odds-on for “A Gentleman’s Guide,” which will most likely capture Best Original Score and Best Book as well.

Best Choreography:  If there is any justice, this Tony Award will go to Warren Carlyle, for the nifty gliding and tapping that infuses the exhilarating “After Midnight.”

The cast of “After Midnight” will perform on the June 8 Tony telecast – reason enough to tune in.