Can’t get to Long Branch? Count your blessings…

Lee Blessing has written some 35 plays since “The Real Billy the Kid” in 1975. The first one I saw was “Cobb.” Co-produced off-Broadway by Kevin Spacey in 2001, it was a moody examination of the life and career of baseball nasty-guy Ty Cobb. I admired the 75-minute play.

Blessing’s provocatively titled “Whores” played at New Jersey Repertory Company in 2004. That play, I wrote, “blisters the history of United States diplomatic relations with Central American dictatorships.” Another one-act effort, “The Winning Streak,” at George Street Playhouse in 2005, used baseball as a metaphor for a father-son reconciliation. It was a “fine, strikingly original” play.

I had seen Blessing’s 1988 signature piece, “A Walk in the Woods,” in 2002 at Evander Duck’s regrettably short-lived Stage East Ensemble and in 2003 at George Street. Nominated for a Tony and the Pulitzer, “Walk” was inspired by actual secret meetings between an American and a Russian arms negotiator during the cold war. The play was – and still is – “engrossing, literate and unusually witty.”

It’s hard to believe the same man wrote “A View of the Mountains,” now world-premiering at New Jersey Repertory Company.

The plot concerns a father’s efforts to derail his Senator son’s radical right-wing political ambitions by threatening to reveal a career-damning secret from the son’s past. The concept is not uninteresting, and the secret is something of a surprise, but fueled by unbridled hostility and absurd accusations, “A View of the Mountains” is little more than a one-note diatribe. Rather than discuss, or even argue, the two men and their wives indulge in expletive-laden name-calling and yelling SHUT UP! at one another more times than at a third-grade recess. There are inane threats of unwarranted legal action (Blessing’s résumé does not include a law degree) and even a neck-choking, hair-pulling brawl between the two wives. 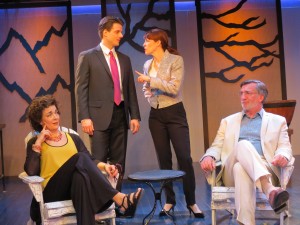 The four one-dimensional characters paraphrase their rigid beliefs and goals over and over. The father, the retired American negotiator from “A Walk in the Woods,” wants to save the country from the potential vice-Presidency of his myopic son (think Ted Cruz without the charisma). The elder wife is a stick-by-your-man-no-matter-what loyalist, and the younger wife is a screeching harridan. Blessing wrote her so unlikable, so nasty, that she’s probably un-actable any better than here. She’s painful to watch, even when she’s not dry-heaving into her briefcase and then gagging and retching her way up the theater aisle. (Could the director have sanctioned the extreme performance?)

That three of the four battlers soften their stances at the very end (guess who doesn’t) serves only to bring the 85-minute proceedings to a welcome close. (A fifth character, the senator’s younger half-brother, was well-acted on opening night by ninth-grader Jared Rush.)

“A View of the Mountains” is a seriously flawed play. Directed here by Evan Bergman, its flaws are in sharp relief.