A Guilt Trip Moves From NJ to NYC: “Jericho”

Jack Canfora’s play Jericho premiered in October 2011 at New Jersey Repertory Company in Long Branch, New Jersey. With some minor edits and four of its six roles re-cast, Jericho is now enjoying an engagement in NYC.

The play, about corrosive guilt and lingering grief in the wake of 9/11, with a side trip into Israeli-Palestinian relations, is set within the framework of a dysfunctional family, although, as the play points out, all families are crazy, even the sane ones.

Beth (Eleanor Handley) is a 9/11 widow, coping with issues that go beyond the loss of her husband. Her new beau Ethan (Andrew Rein, from the NJ cast) waits patiently for her to embrace a new beginning – and, for that matter, to embrace him. Thanksgiving dinner at his mother’s in Jericho, Long Island doesn’t help. Ethan’s brother Josh’s (Noel Joseph Allain) marriage to Jessica (Carol Todd, the other NJ holdover) is in shambles, and Ethan and Josh’s mother Rachel (Jill Eikenberry) is no help. 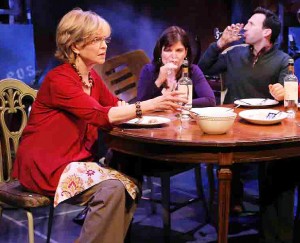 These folks, mom excepted, are proud of their own (and the playwright’s) intelligence, an irritating affectation, which, fortunately, tapers off part way in, as the plot mutes the glibness.

Rachel is a well-meaning dim bulb who fails to acknowledge any disquieting news, and Eikenberry plays her with an upstairs vacancy. Handley’s Beth interacts best with her therapist (Kevin Isola), who is more than he appears to be.

Ethan is a wishy-washy sort, a less-than-endearing quality, but Rein makes you feel for him. As in the NJ production, brother Josh’s adamancy gets tiresome, and in Allain’s playing, the character doesn’t let up.

Todd plays unhappy Jessica with passion and intensity that has deepened in the intervening two years. In the aftermath of the turbulent Thanksgiving dinner, during which the walls of this Jericho family come tumbling down, Jessica, who’s been guzzling wine, explodes. Todd, playing against tipsiness (as drinkers do), strips Jessica emotionally naked. It’s a blistering portrayal.

Evan Bergman’s direction is more static than I remember, but the relationships are defined and mesh as a unit. Jessica Parks’ set, messy piles of household detritus, represents the devastation of 9/11 as well as the family’s disorder.

Playwright Canfora has a knack for exposing details naturally through interaction and conversation. Information about the therapist is one example; learning that a character is doing someone-on-the-side is another.

Jericho does succumb to a couple of bugs. Be advised, playwrights far and wide: over-use of the f-word dilutes its effectiveness. At one point the word is repeated over and over. It’s grating. (Don’t go Mamet on me; there are exceptions to everything.) There’s also a lengthy faux-poetic coda that extends the play beyond its natural ending and dilutes what has gone before.

Notwithstanding its flaws, Jericho is worth a visit. After all, seeing a family more screwed up than yours is a sort of therapy in itself.

Launched nationally in 2007, the Edgerton Foundation provides grants to “worthy American plays” for extended rehearsal time, resulting in more polished performances of more tightly edited scripts.  To date, 150 new American plays have benefited from the program, including Tony-nominated Curtains and Next To Normal, which went on to win the 2010 Pulitzer Prize for Drama.

Non-profit theaters with a “strong and consistent track record of producing new work” are invited to submit plays for consideration. The Edgerton Foundation includes New Jersey Rep in that category and, in fact, has awarded a $14,000 grant to Richard Strand’s Butler, which will premiere in Long Branch next spring.