First Avenue Playhouse has had a certain amount of success with female-ensemble plays. Four women put their hearts into Crimes of the Heart last year, and the all-female cast of Daughters made the most of that play back in 2000. Notably, both were also directed by women.

Now comes The Dixie Swim Club, whose director and cast of five are all female. Working together, they find some emotional and comedic depth in what could be labeled a “chick-play.” Where Daughters explored traditional Italian family values and Crimes of the Heart’s Pulitzer Prize speaks for that play, Swim Club is an extended sitcom about five women with familiar “issues.” (The play’s appeal is to community theaters, where auditioning women greatly outnumber men.) 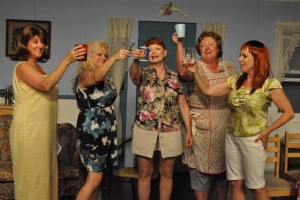 We first meet them at age 44. Dinah (Lori Anne Casciano) is an attorney whose dependency on daily martinis masks her insecurity, and injury-prone Vernadette (Lynne Cefalo) depends on wise cracks to deflect her despair over her law-breaking son. Lexie (Gina Shuster) is a self-obsessed and multi-divorced would-be glamour girl; Jeri Neal (Grace Modla) has made some uncharacteristic life-style choices; and Sheree (Donna Jeanne) is the super-organized former team captain, who still chirps on a whistle to command attention.

The five actors work well together and each captures an essential aspect of her character. Casciano exemplifies Dinah’s self-confidence until the pressure catches up with her. Cefalo portrays Vernadette’s frustrations with a sympathetic comic edge. She also acts the oldest age well, as does Modla, who makes Jeri Neal’s late-developing domesticity believable. Donna Jeanne communicates Sheree’s need to control, and uninhibited Shuster is a good match for uninhibited Lexie. All five have realistic, not overdone, southern accents, which authenticates the setting.

Samantha Ambler’s staging is mindful of the emotional and spatial relationships. Unfortunately, she allows one scene to be dominated by the women’s ostentatious fanning of themselves during their own as well as others’ speeches. It distracts from the performers, a lesson I learned the hard way years ago when I ad-libbed an arm movement during a scene with Tallulah Bankhead.

The play is not without a few zingers. One woman’s mother, in a coma, is “not nearly so judgmental.” Another, dressed garishly to impress a potential employer, is told that “you couldn’t wear that outfit to a phone interview.” There’s also a couple of surprises at the end of the play, but overall, we’ve met these Dixie chicks in other, better-written plays.  Authorship of The Dixie Swim Club is credited to three individuals, which is strange in itself, but whichever of the three decided that “swim” rhymes with “win,” in an oft-repeated refrain, should have his or her word processor confiscated.