Make a date with “First Date”

The lessons to be taken away from the delightful new Broadway musical First Date, which centers on one of those perilous encounters, include not discussing past dates, avoiding the topic of religion and, as poetically expressed in the play, “If you talk about the ex, you can forget the sex!”

Writers Austin Winsberg (book) and Alan Zachary and Michael Weiner (music and lyrics) claim to have drawn on their own first-date experiences, but I had the eerie feeling that somehow they had been along on a few of mine. It’s not just that the circumstances and exchanges are universal, it’s that they’re so damn specific. You will feel the same; I guarantee it.

Aaron (Zachary Levi, TV’s “Chuck”) is a buttoned-up finance guy on his first blind date after a nasty breakup. Free-wheeling Casey (Krysta Rodriguez, from “Smash”) pegs him as a BDV (Blind Date Virgin). His retort, labeling her a BDS, which we’ll leave at its initials, falls flat, which is the story of their first very funny thirty minutes, during which pretty much everything each of them says and does is a turn-off to the other. 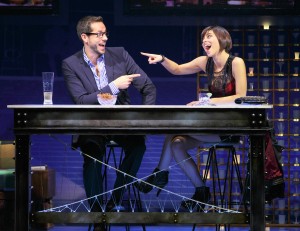 But Aaron and Casey, while different in many ways, are both so appealing that you root for them, through their awkwardness, uncertainty and even hostility, to couple-up eventually. And do they? Not telling (But c’mon; it’s a summertime Broadway musical comedy.)

The setting is a Manhattan bar-restaurant with one table down front for the main event, and tables left and right from which four other actors bounce in and out of scenes as various characters conjured up from the past. There’s Aaron’s cold ex-fiancee (cool Kate Loprest), Casey’s former bad-boy companions as well as his mother and her father. Casey’s sister (excellent Sara Chase), who fixed-up the date, and Aaron’s wise-guy buddy (Bryce Ryness) offer advice, much of which goes unheeded. “What is the point of imagining me,” Gabe says, “if you don’t even listen to me?” Casey also has her own overwrought wingman (overwrought Kristoffer Cusick) who phones her periodically with a backup escape clause (“Bailout Song”).

As directed by Bill Berry, the simple premise is so identifiable that you wish you could sneak in a bit of your own advice. But among the “advisors” and the bistro waiter (Blake Hammond) singing “I’d Order Love,” which sums up everyone’s feelings, all the bases are covered.

Small cast, single set musicals with six-piece band accompaniment (this one’s excellent) frequently fizzle. But when they work, they have charms that often elude more expansive shows. First Date is such a gem; it satisfies both musically and emotionally. It is also, more by design than coincidence I’m sure, the perfect first (or however many) date-show.