Marathon ’33, one of Julie Harris’s ten Best Actress Tony-nominations, opened on Broadway on December 22, 1963. Produced by Actors Studio and written and directed by June Havoc (with input from Lee Strasberg), the play was about Ms. Havoc’s survival in a dance marathon after shedding her Baby June persona (cue Gypsy first act curtain).

Despite John Chapman’s rave in the NY Daily News for the play (“I urge you to see it”) and for leading lady Julie Harris (“her finest performance to date”), Marathon ran only 48 performances. (Cast member Doris Roberts opined years later that the realistically downbeat play had been decades ahead of its time, but that’s another story.)

I was added to the cast during early previews as one of two bodyguards to a shady character who was extorting the marathon management. (The other new hire was Jim Rado, who went on to co-write Hair.) 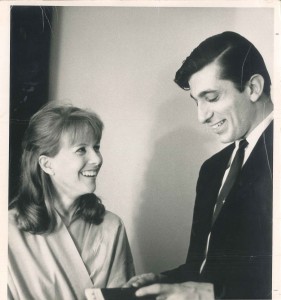 On December 23 I approached stage manager Martin Fried with the bright idea that it might be fun to surprise Ms. Harris during her solo curtain call the next day, Christmas Eve, with an on-stage visit from Santa Claus: me, in my own Santa suit. (Don’t ask.)

Marty told me he’d think it over and to bring in the suit. The next day he gave it a nod. “Julie’s a good sport,” he said. “I’m sure she’ll be okay with it.” That evening I skipped the company curtain call, quick-changed into Santa suit and beard and entered just as Julie’s applause was dying down. She looked up, obviously startled, as the applause ramped back up.

I sat on a chair that had appeared from somewhere and Julie perched on my lap. After some banter, during which she assured me that she had been a good girl all year, we exited into the wings. “What a delightful surprise,” she said. “Thank you, dear.”

A few days later, Marty overheard me telling the story to someone. He beckoned me to the side. “You really think I’d let you surprise the First Lady of the American Stage during her curtain call?” He chuckled. “It could cost me my job…and surely yours,” he said. He had run the idea by Julie, who had agreed after determining who it would be. (You’d get that in if it were your story.) She had also, Marty told me, suggested that a chair be placed on stage.

What a pleasure it was to learn, when we talked backstage at The Belle of Amherst years later, that she remembered the incident. So now, for that and other remembrances, a much belated “Thank you, dear.” 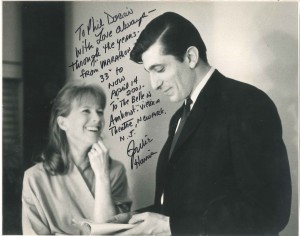 Another pic from the '64 shoot, signed by Julie after a performance of "The Belle of Amherst" in Newark NJ in 2001