A Labour of Love in Central Park

Because of its literary allusions and contemporary (Elizabethan) poetic forms, Love’s Labour’s Lost has never been among Shakespeare’s most popular plays. In the shadow of the more accessible and, well, funnier Midsummer Night’s Dream and As You Like It, to name two, Love’s Labour’s Lost is rarely produced today. But the Public Theater’s rollicking, modern-dress musical adaptation should be seen by everyone who ever squirmed through a straight rendition of the play. Only the purest of purists could quibble with the liberties taken here. 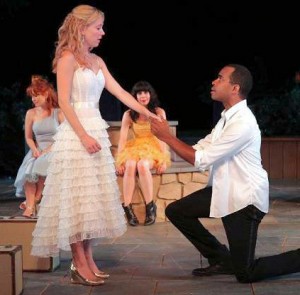 The plot is mostly intact. The King of Navarre and three of his followers, here four recent college grads, enter into a compact to devote three years to intense academic study, with minimal diversion, including total abstention from any female company. Spoiler alert: it doesn’t work out. (The song lyric “Young men are supposed to have sex” is more amusing than raunchy.) The Princess of France arrives with three comely attendants, here recent co-eds, and it is a four-way love-at-first-sight fest.

The 100 intermissionless minutes includes snippets of Shakespeare’s sonnet-rich text, some cleverly scrambled and some as written, most effectively at the end of the play. Among thinly veiled references to All’s Well, Romeo and Juliet and fondly nostalgic nods to Cats and to the Public’s own A Chorus Line, a dozen pop-rock tunes are freshly sung, backed by a nifty six-piece band.  It all adds up to a buoyant romp, ideally suited to the outdoor Delacorte Theater in the heart of Central Park. 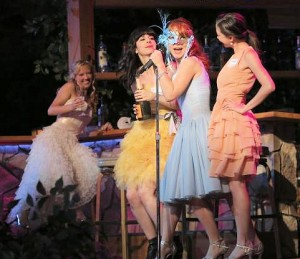 By coincidence, Love’s Labour’s was Shakespeare’s next-written comedy after Two Gentlemen of Verona, which the Public musicalized into a Broadway success in 1972. So what’s next? Shrew’s Kate has already been kissed, but Merry Wives, for one, looms on the horizon. Please, Public powers-that-be, don’t make us wait another 40 years. And meanwhile, if there’s another take on Love’s Labour’s Lost that features a 20-piece high school marching band, point me to it.

At the Delacorte Theater, Central Park (enter park at 81st St/CPW or 79th St/5th Av)
only through August 18, but already rumored for a Broadway transfer. Performances Tues-Sun @8:30. FREE