There’s “Trouble” in River City, but not in Red Bank

It’s hard to come up with a musical that doesn’t revolve around one or two demanding roles and harder still to find people to carry those parts, especially in community theater. Phoenix Productions solved that problem by casting Joe Caruso and Caitlin Alongi as Harold Hill and Marian Paroo in The Music Man.

Phoenix didn’t stop there. From top to bottom, producers Andrea Zawadzky and Brian LaRue’s Music Man is superior not just by community theater standards, but also compared with a few ‘big-time’ productions I’ve seen. The only serious flaw is that it plays only six performances over two weekends.

Astonishingly, one man, Meredith Willson, wrote the music, lyrics and book. The story, developed from the composer’s own recollections of growing up in a small Iowa town, captures the innocent charm of early 20th Century America, while the show he crafted is an enduring highlight of that century’s musical theater heritage.

July 4, 1912: Itinerant “Professor” Harold Hill cons the citizens of River City, Iowa into buying instruments and uniforms for the local youngsters by promising to train a marching band using the “think system.” Marian Paroo, the town librarian, sees through his scheme from the start and – surprise, surprise – into his heart by the end.

Joe Caruso is entrusted with the two numbers that propelled journeyman actor Robert Preston to stardom. “Trouble (in River City)” alerts the citizens to their problem, and “Seventy-six Trombones” proposes the solution. The first is rapid-fire patter (“pre-rap rap,” someone pointed out) and the other is as rousing a marching-band number as has ever been written for one performer or a hundred.

Caruso sails through both of ‘em, bounding around the stage without missing a beat. By mid-song the Professor’s got the 40-plus (!) on-stage Iowans – and the audience – in the palm of his hand. Backed by musical director Andrew Macirowski’s bold, polished orchestra, every infectious syllable belongs to Caruso’s likable scoundrel. (No small praise, considering some of the stand-offs I’ve seen between Harold Hills and Orchestras.)

The show’s ballads are exquisite, and Ms. Alongi’s unadorned singing of “Goodnight, My Someone,” “My White Knight” and “Till There Was You” is a lesson in trusting the material. She just stands in character and sings, and it’s lovely. Her voice is gorgeous; her pitch is nigh perfect; her high notes are thrilling. 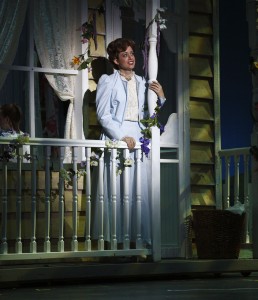 Caitlin Alongi as Marian the Librarian

A rough edge or two need smoothing over. Caruso could temper his high-octane approach in the budding-romance scenes, and Alongi might act more of the warmth that she sings so effectively. Musically, both are gooder-than-good, and meeting-in-the-middle emotionally would enhance their chemistry.

The Music Man is not a two-person show, and director Joseph Stefanelli has not skimped on attention to other characters. Outstanding contributors include James Marhold as bumbling Mayor Shinn and Carolyn Vicari as Marian’s earthy mom. As Harold’s former swindle-partner, Drew Barkley steps lively to Harold’s hidden gem “The Sadder-but-Wiser Girl,” and later anchors the brisk “Shipoopi.”

The mayor’s daughter and her forbidden beau are played by Serina Figueiras and Jake Shatsky, an appealing couple who spark much of Kelly Gemellaro’s nifty choreography.

Kid actors can make your teeth ache, but not Alexandra Pennington as Marian’s piano pupil or Jake Walsh as Marian’s lisping little brother. They and a dozen of their age-mates are authentic Iowans, with a special shout-out to sweet eight-year old Carly Cavanaugh, who, according to her program bio, loves to eat tacos in her free time. Howard Smith and Gina Scherzo also contribute nicely as the salesman with the coveted anvil gag and the Mayor’s busybody wife.

No role is more important to The Music Man than The Quartet. Hearing Casey Okamoto, Michael Dalberg, Bob Brown and Timothy Slisky sing “Sincere” and “It’s You” is a treat, and “Lida Rose,” alone and then in counterpoint to Marian’s “Will I Ever Tell You?,” is…well, pick your favorite superlative.

Sue Darling Hawley’s costumes are darling, while Anthony Callichio’s lighting and Lou Mannarino’s sound designs mesh beautifully with Ashley Cusack’s terrific set design. (Cusack’s design for the “Till There Was You” footbridge scene is perfection.)

Meredith Willson’s three other Broadway musicals were undistinguished (Go ahead, hum a tune from Unsinkable Molly Brown), but based on the “tribute to his home state,” his genius cred is unquestioned. “Seventy-six Trombones” and “Goodnight, My Sweetheart” are the same song, for heaven’s sake. Try that at home.

Putting so much work and creative energy into a mere six-performance run should be against the law. It’s not, of course, but failing to attend one of the last several performances is close to a felony.