Mid-summer in Holmdel with Shakespeare

In his book “A Lifetime with Shakespeare,” Paul Barry, the moving force behind and co-founder (with me) of the New Jersey Shakespeare Festival, suggests that designing A Midsummer Night’s Dream would be an ideal test for admission to the United Scenic Artists Union. The play offers infinite opportunities, he says, for innovative sets, costumes, lights, sound and music.

Holmdel Theatre Company’s Dream has no set, slap-dash costumes, on-off lighting and sound limited to the playing of recorded Neapolitan pop tunes. Regardless, the play does survive, if not flourish.

A Midsummer Night’s Dream is indestructible. William Shakespeare’s most magical comedy can withstand all of the above and indeed it does at Holmdel. With a local cast of 21, all amateurs save one, the story unfolds with its romantic entanglements and mystical happenings intact. Some of the comedy also comes across, although it’s a while before anyone realizes that it’s okay to point up bawdy Elizabethan word-play. 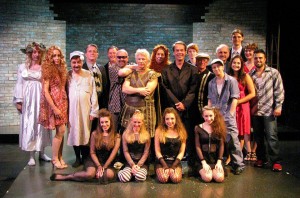 The cast of "A Midsummer Night's Dream" (Photo: Grace Modla)

When, at the behest of Hermia’s father (Bob Maehrien), the Duke of Athens (Charlie Deitz) threatens her with death (or worse, exile to a nunnery) if she doesn’t wed Demetrius, Hermia and Lysander take off for the woods, followed by Demetrius and Helena. There the four become subject to the sport of Oberon, King of the Faeries (Michael Chartier), his spritely gofer Puck (Sam Maidlow), and Queen Titania (Cody Dalton).

Meanwhile, a ragtag troupe of tradesmen (more below) is rehearsing a play to be performed at the wedding of the Duke and his captive bride Hippolyta (Ms. Dalton, doing double duty).

Under Gary Shaffer’s direction, all maintain their characters and further the story, but updating vaguely to today, forswearing sets and costumes and turning the tradesmen into Italian caricatures does not convey any discernible locale.

About the costuming: Allowing actors to rummage through their own closets, as it seems here, is rarely a good idea. It becomes catch-as-can, as the lovers’ motley outfits attest. Is Shakespeare’s Helena, for example, here neatly casual, really turned on by Demetrius’s disheveled grunge and scruffy visage? Maybe, but their lack of chemistry belies the attraction.

Among the positives, Maehrien (the Dad) and Deitz (the Duke) establish the plot-important romantic boundaries and Williamson (Lysander) lays out the into-the-woods scenario with exceptional clarity. And once we’re in the woods, Chartier’s cello-toned voice serves Oberon very well.

Titania’s attendants, Peaseblossom (seventh-grader Cavan Lynch) et al, are well cast, and under the circumstances, I buy down-playing their sexy context. But not steaming up Titania and donkey-headed Bottom’s ‘hooking up’ is on them and director Shaffer.

Shakespeare’s fifth act is given over to the “rude mechanicals” production of Pyramus and Thisbe, always a comic highlight that does not disappoint here; it is very funny. (It would be the first that isn’t.) Pyramus and Thisbe is a mash-up of pre-Elizabethan tales, paralleling the one rendered much more seriously by the playwright in Romeo and Juliet. (Some evidence suggests that Shakespeare interrupted the writing of R & J to accept a commission to write a comedy that became Dream.)

The tragic theme is strictly lampooned, and very well by Holmdel’s faux mafiosos. The professional actor Glenn Jones and the hammy character Bottom would appear to be a perfect match. One is adept at playing outrageous comic roles, and the other has defined mugging for 400 years. Curiously, Jones is restrained in the early scenes, even through the ass’s head business, but he makes up for it as Pyramus, the self-promoting male half of the play-within-the-play’s absurd couple. He’s matched by the antics of Dave Murray as Flute playing Thisbe, the female half, and they are ably abetted by Gary Allen Powell (as Quince, the ‘director’), Jim Watson (Snug, playing lion), Mark Tesoro (Starveling, moon) and Lyle Lithgow (Snout, an imposing wall).

This is my fifteenth Dream in the past 20 years. It’s not one of the best, but it’s far from the worst. It’s also the second Dream and the fourth Shakespearean play I’ve seen at Holmdel in that span. Their next season includes the quirky 2009 Obie-winning Circle Mirror Transformation and Moliere’s The Imaginary Invalid. Pushing the boundaries of dramatic literature is risky, especially in community theater, and there are degrees of success. Based on selection, intent and effort, Holmdel’s A Midsummer Night’s Dream is a worthwhile product.

Through August 3 at Duncan Smith Theatre on the campus of HolmdelHigh School on Crawfords Corner Road, Holmdel. Performances Fri and Sat at 8pm; Sun at 2pm. Information and tickets ($12-$22): 732-946-0427 or at www.holmdeltheatrecompany.org