The New Jersey Repertory Company press blurb for Marisa Smith’s Saving Kitty poses the question “What happens when a daughter brings a young man to meet her ultra-liberal parents for the first time and he turns out to be the antithesis of everything they stand for?”

What happens is that the “ultra-liberal” mother’s claws come out and she sets about eviscerating her daughter’s beau. Core values are challenged and relationships are variously cemented or severed in this version of “Guess Who’s Not Welcome to Dinner” in this upper-middle class Manhattan apartment.

Soon after Kitty (Sarah Nealis) shows up with fiancé Paul (Christian Pederson), it is revealed that he is an Evangelical who plans to open a religious academy in the Bronx and who believes in traditional marriage roles, effectively derailing Kitty’s career plans.  It is stipulated that Evangelicals are not the same as repressive Fundamentalists, but that does not stop Kitty’s mother Kate (Judith Hawking) from going ballistic at the thought of having a born-again Christian for a son-in-law. 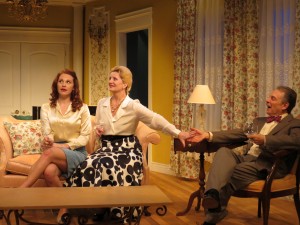 Kitty is a defenseless young woman with a lusty libido, and Paul is a blandly likable fellow who believes in waiting until marriage. Considering that they submit meekly to mom’s unrelenting rants, when any self-respecting 20-somethings would walk out, Nealis and Pederson create an appealing couple.

Kitty’s father (John Fitzgibbon, very good in a thankless role) is less judgmental. A United Nations functionary and a serial womanizer, he is preoccupied with furtive texts and a briefly mentioned bomb attack in Istanbul.

Kate is the centerpiece of Smith’s play. She’s an intimidating, alcohol dependent, religious bigot. Try as it does, the play cannot skirt the fact that Kate is a horrid person, but in Ms. Hawking’s bravura performance, you can hardly take your eyes off her.

Feigning sincerity while paying an undeserved compliment is an everyday practice, but Hawking achieves the opposite. Her Kate tosses off insults and skillfully (character and actor) escapes responsibility by pretending she didn’t mean them. It works on Kitty and Paul and on the audience that greets the remarks with laughter, as I did, for a while.

Director Evan Bergman keeps everything moving at a decent pace, wisely giving Ms. Hawking plenty of latitude. A Kitty-Paul scene that’s supposed to be sort of sexy sort of is, and as usual, Jessica Parks’ set design creates the intended atmosphere, here a sense of ‘old money.’

Saving Kitty is overlong and over-written, but propelled by Hawking’s Kate, it is eminently watchable. At one point Kate’s husband confronts her with “You are turning into a…witch.” (That’s the playwright’s evasive word, not our euphemism.) Considering that we’ve been subjected to Kate’s witchiness for the past 90 minutes, his mild assessment is laughable. The wonder of Hawking’s performance, however, is that we don’t grasp just how hateful Kate is until the next morning.

[I wonder if, rather than a born-again Christian, the beau were possessed of some other characteristic unacceptable to the mother – an Orthodox Jew, say, or mentally challenged – would the mother even be written with similarly bigoted concepts and terms? If so, would we laugh? Just pondering…]