Universally recognized for the quality of their namesake’s plays, the (George Bernard) Shaw Festival, in scenic Niagara-on-the-Lake, 20 minutes away from wonder-of-the-world Niagara Falls, also excels in other programming. Since its founding in 1962, the Festival has expanded to include plays from and about Shaw’s era as well as contemporary works that reflect his views.

Ibsen, Chekhov and Noel Coward are among those whose contemporaneous works have graced Festival stages in recent years. This season, Oscar Wilde and W. Somerset Maugham are on board, along with the musical Guys and Dolls, which opened on Broadway 22 days after Shaw’s death in 1950 at age 94.

Both Wilde’s Lady Windermere’s Fan and Maugham’s Our Betters are prime entries from the fertile 1890-to-1910 theatrical period.

Rigid Victorian social standards did not subside with that Queen’s death in 1891. While often grounded in hypocrisy, propriety was a priority throughout that decade, and no play exploits those values to better effect than does Lady Windermere’s Fan.

Lest that assessment put you off, know that Wilde’s play is not moralistic. The period is peerlessly established, and while the characters are strait-laced, the situation that engulfs them is not.

One afternoon, Lady Windermere (Marla McLean) discovers that her husband has been siphoning money from a secret account to “take a house” for Mrs. Erlynne (Tara Rosling), a widow of questionable background. Lord Windermere even invites her to that evening’s Ball, celebrating his wife’s 21st birthday. Shocking, yes; but Lady W and Mrs E become a compelling pair. what develops between them that evening and into the next day is as intriguing as anything written since. 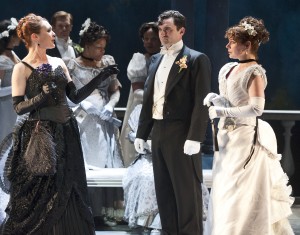 Some of Oscar Wilde’s characters may be stuffy, but the playwright was no bore. Neither is director Peter Hinton nor his superlative cast. The prop Lady Windermere’s fan, a birthday gift from her husband, is a key element of the plot; the play Lady Windermere’s Fan is terrific theatre.

W. Somerset Maugham’s Our Betters is set in pre-World War I, when it was not uncommon for extremely wealthy American women to settle in London for the purpose of snagging a titled British husband. Love was not necessarily a factor, and the Lords and Dukes were usually on their uppers (broke).  The women became Lady Somebody and the men became solvent: a Mutually Beneficial Arrangement.

Rarely has a play educated so entertainingly on so interesting a topic. Each of four women has either made such a match, recently ended one or is seeking one; and each is outspoken about her situation, whether desperate, resigned or uncertain. Above all, an appealing flow of acid wit prevails throughout.

Young Bessie has come from America to stay with her sister Pearl, aka Lady Grayston, a conniving matchmaker, married herself, with a ‘benefactor’ on the side. Pearl’s friends include Duchesse Minnie, a cougar with “a passion for rotters,” and widowed Princess Flora, cynical but still warm-hearted. Two fellows are besotted with Bessie: the British Lord Bleane and Bessie’s former sweetheart who has followed her from America to London.

Over three acts that fly by, one woman gets her comeuppance, one becomes engaged, one remains comfortable as-is, and bubbly Bessie, played by bubbly Julia Course, ends up paired with…well, it is a happy ending.

There’s no denying the appeal of Guys and Dolls, and the Shaw’s production is energetic and splashy. There is, however, something off-putting about it, as if director Tadeusz Bradecki, whose credits include “numerous awards for directing in Poland,” feared that his audiences wouldn’t “get” Damon Runyon’s 1950 New York City.

To that end, the cast accessorizes the vernacular as if to “translate” the text. Voices are pinched up and final consonants are omitted in a vain search of a NYC accent. Gags are over-sold and lyrics are ‘indicated’ (singing “stars in the sky,” for example, requires pointing upward). What makes Guys and Dolls a classic, besides such as Frank Loesser’s “I’ll Know,” “If I Were a Bell” and “Luck Be a Lady,” is that the characters are real. Despite some unusual names – Nicely-Nicely Johnson, Rusty Charlie, Harry the Horse – they are not caricatures or, as here, cartoons.

That said, there’s some decent singing and acting among the principles, and a well-choreographed “Havana” ballet, sparked by Elodie Gillett’s delightfully tipsy Sarah Brown. 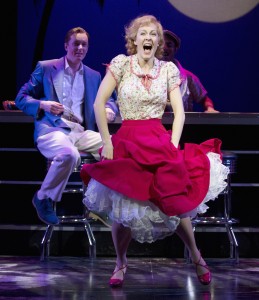 It’s hard to argue with box-office success, and Guys and Dolls is a major attraction. I do hope, however, that people don’t come away from it believing that Miss Adelaide developed a two-syllable co–eld.

The three plays above run into October, as do “Enchanted April,” “The Light in the Piazza” and Shaw’s “Major Barbara.” Niagara-on-the-Lake is in the heart of Niagara’s wine country. For schedule and lodging details, as well as information about wineries and other area attractions: www.shawfest.com