At 61 years and counting, the Stratford Festival remains faithful to Shakespeare, despite dropping his name from their title, after only adding it in 2008. Four of twelve productions are The Bard’s, including Measure for Measure and Romeo and Juliet, with Merchant of Venice and Othello joining them in August. Two of the others are musicals: Fiddler on the Roof and Tommy, as different from each other in style as they are alike in quality.

There is no more stirring opening number than Fiddler‘s “Tradition,” which is so well staged and sung at Stratford that there was no way, I thought, the rest of the show could match it. How wrong I was! Under the inspired direction and choreography of Donna Feore and highlighted by Scott Wentworth’s masterful performance, it soars even higher. 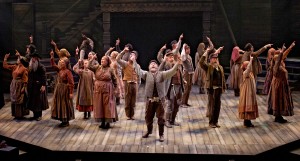 Joseph Stein (book), Jerry Bock (music) and Sheldon Harnick’s (lyrics) adaptation of Sholom Aleichem’s heart-warming (and heart-wrenching) tales of Jewish villagers in Czarist Russia in 1905 centers on Tevye (Wentworth), his wife Golde (Kate Hennig) and three of their five daughters, who, in increasing degrees, defy Jewish tradition with their marriages.

Fiddler’s genius blend of drama, comedy and music has the capacity to move anyone of any faith (or none) to tears and laughter, often at the same time.

The Aleichem stories are at the heart of the stage version, and Stratford’s ‘tradition’ of casting fine actors in musicals pays off when a musical’s “book” is as important as this one. Every essential character is rich and complete, from Wentworth’s and Hennig’s (an absolutely believable couple), through and including the 40-member ensemble.

The musical numbers illuminate the characters and advance the story. “If I Were a Rich Man” reveals Tevye’s depth of devotion even as he laments his poverty, and “Matchmaker, Matchmaker” brings the three daughters to life. “Sunrise, Sunset” is a bittersweet lesson in the passage of time, and anyone who’s been married for 25 years – or 25 minutes – will melt during “Do You Love Me?”.

All that praise noted, it’s the delivery of the comedy that impressed me most. With his droll manner, his sense of irony and his slightly irreverent repartee with God, Tevye is a very funny fellow. As played by Wentworth, every laugh – and there are many – comes from within the character. There are no conscious gags, no ‘shtick’.  Tevye has never been less of a ‘comic’ – or more amusing – than here. This is a Fiddler to cherish.

Anyone who doubts the continued relevance of Shakespeare might want to compare Measure for Measure’s theme of legislated morality with recent U. S. legal decisions regarding non-criminal personal behavior.

At the start of Measure, moral and social corruption is rampant in 1600 Vienna (here 1949, making for dull costuming). With his law-enforcement credibility at zero, the Duke deputizes Lord Angelo to rule in his place and skips town. Angelo promptly condemns young Claudio to death for impregnating his lover Juliet (not the Capulet one), and when Claudio’s sister Isabella, a religious Order novice, pleads for clemency, Angelo agrees to spare her brother’s life on the condition that she sacrifice her virginity to him.

The Duke, disguised as a Franciscan friar, saves the day (and Isabella’s chastity) by means of some intricate manipulation, and manages to engineer several marriages by play’s end: one romantic (Claudio and Juliet), one reluctant and one coerced.

A fourth proposal, the Duke’s to Isabella, is an element of the play’s “problem” status, based on Shakespeare’s omission of a response from the lady. Some, me included, find the cliff-hanger ending fascinating, but director Martha Henry’s staging leaves little doubt about Isabella’s decision, not to be revealed here.

The production is very well acted, particularly by Geraint Wyn Davies (the Duke), by Carmen Grant (Isabella) and by Stephen Ouimette as Lucio, whose deceitful ways contribute intrigue and a healthy dose of humor to the proceedings. After all, if, by simple definition, Shakespeare’s tragedies end with deaths and no marriages and his comedies with marriages and no deaths, Measure for Measure is indeed a comedy.

Far from updating Romeo and Juliet, Stratford’s is done in what’s known as Original Practices. It is in Elizabethan dress on a Globe Theatre stage, with no scene breaks (entrances and exits cross), no props and no lighting beyond what the sun might have provided on an afternoon in 1662, the year of the first documented production.

In other words, the play is performed in the conditions for which it was written, and it works. It works because…well, because the play’s the thing, and anyone who isn’t drawn into its poetry and romance, even with the house lights on, is stony-hearted. It works because within a line or two of each scene you know exactly when and where you are. And it works because Sara Topham is a luminous Juliet. 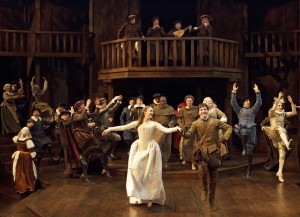 The play, set in Verona, Italy, circa 1300, is a timeless tale of all-consuming young love, played against two families’ “ancient grudge.” Romeo and Juliet take their own lives, but gang warfare is at the root of their tragic demise. “What a scourge is laid upon your hate” is as valid now as it was then.

Juliet’s stated age is nearly fourteen, but of course she’s usually acted by women past their teens. Only a cad would reveal an actress’s age, so let’s just say that if Sara Topham is as adept at portraying double her age as she is at half, she’d be a credible old lady. In the play’s centerpiece balcony scene, her Juliet glows with the bloom of first love and simmers with the rush of first passion.

The closing scenes take place inside the Capulet’s family burial vault. Usually, the stage lighting is dimmed, creating the gloom. Here, under director Tim Carroll’s guidance, the darkness is “acted” so realistically that we found ourselves squinting (through tears, I might add) in order to make out the goings-on – in full light.

Remember the Beatles “Yellow Submarine” movie with its moving images and bright colors? Stratford’s Tommy is “Yellow Submarine” on speed. Multi-shaped and hued on screens of every dimension, it is a hi-tech digital marvel. Driven by an eight-piece orchestra that includes three keyboardists, Pete Townshend’s creation (music, lyrics and book) throbs with energy that borders on frenzy but never crosses that line.

The rock opera, written in 1969, was recorded by the British rock group The Who, and The Who’s Tommy was filmed in 1975. It was adapted for Broadway by Townshend and Des McAnuff, who won the Tony Award for his direction. Wayne Cilento’s choreography was similarly honored, and both McAnuff and Cilento are repeating their chores at Stratford. Talk about a pedigree!

The physical production is memorable, with shape-shifting screens and colorful washes, but the imaginative framework does not overwhelm the story.

1941: Tommy Walker is conceived before his father goes off to war, where he is captured and imprisoned. When he returns unexpectedly, Tommy, now four, witnesses a fight between his father and his mother’s new lover, in which someone is killed. Here, Captain Walker kills the lover. (In the movie, the lover kills Walker.)

The trauma renders Tommy unable to communicate in any way. Portrayed at ages four and ten (by brilliant young actors) he becomes a pinball wizard in his teens (Robert Markus), regains his senses and becomes a cult superstar. Finally, tiring of the messianic life, he returns to the bosom of his family. A simple enough fable, but as propelled by the pulsating music and the vivid light show, a feast for ear and eye.

Cilento’s choreography is thrilling, as are the 20 or so accomplished dancers who energize it, bopping and boogieing and swinging as if their lives depend on it. Their lives may not, but their tickets to NYC might. I’m betting on Tommy to follow in the footsteps of Lear in 2004, Earnest in 2011 and Superstar last fall, and move to Broadway.

“Fiddler,” “Romeo & Juliet” and “Tommy” run into October; “Measure for Measure” closes September 21. Other shows, which run at least through September, include “Othello,” The Merchant of Venice,” “Waiting for Godot” and “The Three Musketeers.” For play schedule, travel and lodging information: 800-567-1600 or at www.stratfordfestival.com