In what qualifies as a mini Garden State Noel Coward Festival, Fallen Angels has opened at the Shakespeare Theatre of New Jersey in Madison, one week after the supreme British wit’s Present Laughter closed at Two River Theater in Red Bank. Angels, written some 20 years before Laughter, when Coward was only 25, is less polished than the later play, but it is a very funny and innovative farce. 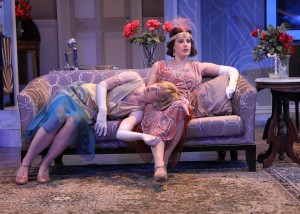 After seven years of marriage, best friends Julia (Julie Jesneck) and Jane (Melissa Miller) are “not in love with our husbands any more.” Coincidentally, or maybe not, dashing Frenchman Maurice, with whom both women had had pre-marital affairs, re-appears in their lives. The situation is delicious and the dialogue is ripe with suggestive particulars and snappy come-backs.

Fallen Angels is a farce without door-slamming. Done in two acts (originally three), the first half, greatly amusing on its own, sets up the rollicking second half in perfect farcical style. At the start, we see the couples together before the husbands go off to play golf, leaving the wives to have their “seven year itch” convo in a long two-scene. Jesneck and Miller, animatedly directed by Matthew Barbour, get all the comic mileage from it, becoming progressively tipsy along the way.

In the second act, after goings-on too involved to detail here, each woman has a hilarious scene with the other’s husband, capped with the appearance of Maurice, played to the hilt by Michael Sharon, who gets more laughs out of his one scene than should be legal.

Fallen Angels is well worth seeing on its own, as was Two River’s Present Laughter (review below).  Seeing them both within a month or two is a rare treat.

“Fallen Angels” at the Shakespeare Theatre of New Jersey, Madison NJ, through July 28. For performance schedule & reservations: 973-408-5600 or at www.shakespeareNJ.org