Clowns do comedy and comics tell comedy, but humorists create comedy. They mine subjects and situations that may not be inherently comical for elements that lend themselves to being made fun of, or about. Humorists are often cynics, sometimes malicious, maybe hopeful. Whichever, the accomplished among them tend to be highly intelligent. Colin Quinn is one such. 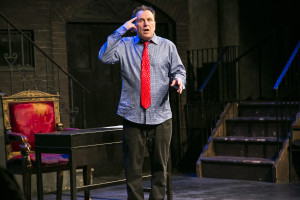 “Colin Quinn Unconstitutional,” running through August 8 at the Cherry Lane Theatre in the West Village, is a fast-paced 70-minute monologue about our revered 240-year old Constitution. While people hardly ever mention the Declaration of Independence, our “divorce papers” from England (“It wasn’t them; it was us”), the Constitution continues to govern our lives and dictate our actions to this day.

Few Americans have actually read the Constitution – it’s four pages long, for heaven’s sake – but most people think they know it, especially when they’re drunk. It may be the only document that becomes better-known as more alcohol is consumed. (Ever hear a sober person declaim “I know my rights!”?)

Quinn has a way not only with words, but with concepts. In more or less chronological order he takes us from four months in Philadelphia that produced a “more perfect” Union (‘Perfect’ would have satisfied most countries) up to today when he declares that “we almost pulled it off.”

Much of Quinn’s material is stuff you believed all along, but didn’t know you believed it until he clarifies it for you. He reminds people who call deer hunting a sport that it’s not a sport if one team doesn’t know it’s playing. And while much of his material is left-leaning, he does strike a balance. Most important, it all hits home, regardless of your politics. (Pro-choice, pro-death penalty and a supporter of gun rights, he says he just favors population reduction.)

Among his incisive riffs is one on the shift in tolerance for public discourse: forty years ago, racial jokes proliferated and people walked out if a mainstream comic used the f-word; now the opposite is more likely. On Presidents: Some, Grant for one, were known as hard drinkers; President Obama can’t even sneak a smoke.

Without apology, Quinn employs references without clarification; you’ll either ‘get’ them or not. If every celebrity, he says, was treated the same as Paula Deen for past use of offensive language, there’d be no one left but Marlee Matlin.