New Play at NJ Rep: “Happy” is only the title…

One of the four characters in Happy, Robert Caisley’s new play at NJ Rep, ends up happy at the end, but you won’t learn here who it is. In order of appearance, it could be 40-something Alfred (Michael Irvin Pollard), who is greeted when he arrives at his artist-friend Eduardo’s apartment by Eva (Susan Maris), fresh from the shower and clad only in a towel. Or maybe it’s alluring Eva herself, who relieves Alfie, as she nicknames him, of his trousers, which had been splashed in an SUV drive-by.

It could be Eduardo (Mark Light-Orr), also in his 40s, whose live-in Eva is half his age. Or, last but hardly least, there’s Melinda (Wendy Peace), who arrives a bit late for her first night out after years of being home-bound, caring for her and husband Alfred’s severely disabled daughter.

Short of who kills who in Hamlet, revealing the end of any play is generally unwise, and anyhow, it’s the journey, rather than the destination, that fuels this well-crafted 90-minute play.

It’s not a knock to say that Happy follows a familiar formula: The Dinner Party From Hell. That setting not only brings assorted characters together into a confined space, but also, every audience member can relate to a dinner party that went south by dessert. (No? You obviously weren’t paying attention.) 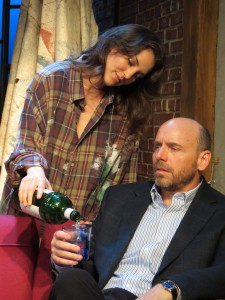 Alfred and Melinda have been invited to Eduardo’s to renew the men’s 14-year friendship and to meet Eva. The banter between Alfred and Eva, who has a need to divulge much too much personal information much too soon, starts off as light flirtation, but darkens by degrees as the play progresses.

Eva has her own inner on-off likeability switch, which Maris manipulates with eerie dexterity. Just when you think Eva’s a real sweetheart, her claws come out and Maris effectively reveals her witchy side. You wouldn’t want a girlfriend like Eva. (Or maybe you would; at least you wouldn’t be bored.)

Eduardo is a shallow fellow, a characteristic that Light-Orr mines for more substance than meets the eye. His acceptance of a small humiliation by Eva is deftly acted, and like Chekhov’s gun, it goes off later in the play.

Melinda and Alfred both deliver revealing monologues. Hers, in which she extols her husband’s patience with their afflicted daughter, is movingly voiced by Peace, who goes on to reveal the cracks in Melinda’s self-protective shell. In Pollard’s playing, Alfred’s growing discomfort hovers over the character and indeed the play, culminating in a totally believable outburst that bubbles up until the lid comes off.

SuzAnne Barabas directs with a sure hand, keeping the relationships clear, even as their dynamics shift. This is one of four “rolling premiere” productions of Happy – highly likely the best-directed one.

The play isn’t perfect (although Jessica Parks’s artist-loft set design is). It could be trimmed and tightened; even several minutes in 15-second snips would ramp up the tension. And guzzling warm gin without so much as a grimace? Don’t think so. (There’s no ice; Eva has sensitive teeth.)

Alfred’s extended rant appears to put a cap on the play. Sure, you think; that explains a lot. But don’t leave your seats just yet. Playwright Caisley has a double whammy in store that leaves just one character smiling, and I’m still not telling which one.