A gem from the past: “Present Laughter” at Two River Theater

Once, when asked how he would be remembered, Noel Coward replied, “By my charm.” Garry Essendine, the leading man in Coward’s well-mannered farce Present Laughter, oozes that characteristic. Played with unerring finesse at Two River Theater by Michael Cumpsty, Essendine, based on Coward himself (with an adjustment or two), charms the pants off everyone, some literally.

Plays about Theatre, with actors playing actors, can be great fun. This one, revolving around a narcissistic matinee idol grappling with the onset of middle age, surely is. Directed by David Lee, whose credentials include TV’s “Cheers” and “Frasier,” and cast from top to bottom with actors whose comic timing is perfection, Present Laughter is a fitting cap on TwoRiver’s 19th season. 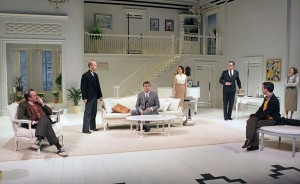 In the course of several hectic days that whiz by in two delightful hours, Essendine copes with demands to appear in a new play, revelations of multiple affairs, predatory women, irate husbands and his own separated wife’s sarcastic commentary, all while planning an ocean crossing. Written 70 years ago, the references to seductions, adulterous assignations and the like, are euphemistically discreet, but anyone who doesn’t find them sexy has no imagination.

Seeing different productions of the same play affords a critical perspective. A staging of Present Laughter last year in Canada focused on the self-centered star’s brittle protective shell; the slick staging was certainly funny. Cumpsty’s fellow is as self-absorbed, but he’s not prickly; he’s more amused than annoyed by the confusion going on around him. It’s every bit as funny, but warmer. This Garry Essendine is a likeable egotist.

The rock in Essendine’s life is his loyal secretary, played by Veanne Cox. The self-assured, nervy Monica is every bit her boss’s equal. Their relationship is one of the production’s treasures. Kaitlin Hopkins is just right as Garry’s past and present wife, who takes no guff. (“Who left my bed and board?” he whines. “I did, thank god,” she tosses back.)

Who but Noel Coward could come up with a household staff like regular-guy butler Fred and cheeky maid Miss Erickson, with an ever-present cigarette dangling from her lips? Played to perfection by Richard Hollis and Camille Saviola, they are way more than functional characters. Describing Cole Escola as the fidgety young playwright who worms his way into Garry’s life (but not his affections), is a challenge: for now, Pee Wee Herman on speed will do.

Mark Capri and James Riordan round out the sterling cast as Garry’s managers and theatrical backers, each with a secret vice; and as an arts patron, Robin Moseley appears late with her niece. (Guess who.)

I was put off at first by the extraneous singing of “Mad About the Boy” by various cast members before each scene, but by the time Miss Erickson’s turn came (sans ciggy) I was won over. After all, Noel Coward did write the song. 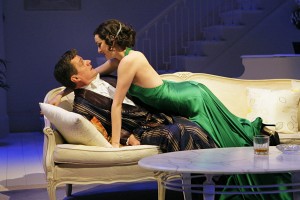 Costume designer Tilly Grimes and her nimble-fingered Costume Shop personnel are virtual co-stars. The women’s outfits, all constructed from scratch, are stunning. One such, a shimmering green evening dress worn by the, um, available Joanna, is as notable for its clinging drape as it is for revealing Leighton Bryan’s flawless upper back.

While director Lee has indeed fashioned an ensemble, it’s still Garry Essendine’s play.  Michael Cumpsty is in Essendine’s skin and, for that matter, Noel Coward’s as well. Every laugh is secure, from the obvious (and painfully funny) ones to the droll throwaways sprinkled liberally through every scene. Beyond talent, portraying sophistication for the masses is a skill, and Cumpsty owns it. His is a performance to cherish – and imagine: right in our back yard!