What do a Romanian mother of a sickly baby, a Nigerian-immigrant cab driver, a foul-mouthed part-time hooker and a middle-aged couple with marriage issues have in common with one another and with the hooker’s sometime boyfriend?  At first sight, little or nothing at all, but by the end of The Electric Baby they are a tight-knit group. Well, tight-knit might be an exaggeration; let’s just say they are intertwined, each with the others.

The mom, rocking and knitting contentedly beside baby’s wicker bassinet even as the audience files in to Two River Theater’s Huber Theater, is a purveyor of cautions (quiet, don’t wake the baby) and home remedies (potatoes for armpit deodorants; banana peels for headaches).

Next up is the married couple, sniping at each other until the woman stalks off. Cue the cab driver, a compulsive lottery-ticket buyer, and finally hooker Rozie and friend Dan, who, linked by sex-toy handcuffs, jump into the cab with a barrage of spewed-out f-bombs (from her).  This set-up leads us to believe that the parties, or units, are strangers to one another; discovering how they are not is the interesting feature of Stephanie Zadravec’s 100-minute intermissionless play. 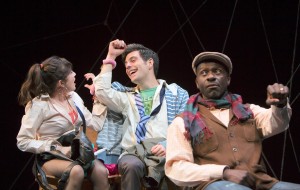 Lucy DeVito, Nick Lehane and Oberon K. A. Adjepong in "The Electric Baby"

Revealing any but the most remote of the connectors would be unfair to the slice-of-life drama-with-laughs. Suffice it to say that an impetuous (off-stage) act by one of the characters causes an incident that goes on to impact all the others’ lives.

The acting is uniformly fine, and director May Adrales deserves much credit for finding commonality among the disparate characters. As the baby’s mama, Antoinette LaVecchia is equal thirds mother, font of folk wisdom and stand-up comic. The play is set in present-day Pittsburgh, but in Lizbeth Mackay and Steven Skybell’s playing of the squabbling couple, it could be present-day anywhere.

Oberon K. A. Adjepong’s cab driver personifies unflappable acceptance of even the most uncomfortable of situations, although he is tested by that steady stream of f-bombs out of the mouth of Rozie, played with over-obvious actor-zest for the epithet by Lucy DeVito.  Nick Lehane completes the cast, playing several characters, real and imagined.

I am really tired of the proliferation of the word fuck in all its forms in self-styled “modern” plays, but my irritation is not grounded in Puritanism. On the contrary, robbing that powerful word of its shock and amusement value through over-use is a crime against the language. And having the cab driver post a sign saying “Please watch your language” when Rozie visits him, an admonition she ignores, btw, makes my point rather than the playwright’s.

Ironically, while I have chosen not to give away too many particulars, the playwright is not similarly constrained. The Electric Baby comes to a nigh-perfect ending about at the 85-minute mark and then keeps going, tacking on scenes as if we cannot be trusted with anything less than tidy resolutions. All the play’s elements that had engendered a sense of wonder and had piqued imagination are reviewed and over-stated – or worse, enacted.

Up to that point, despite some f***ing distractions, The Electric Baby is an attention-holder.