The 2013 Tony Awards: One Critic’s Picks

The American Theatre Wing’s Tony Awards honor theatrical excellence at the Broadway level. Quibble about commercialism or the exclusion of off-Broadway if you will, but the Tony Award telecast provides millions around the world with their only window into New York City’s #1 tourist attraction.

Some 700 voters, including press agents and theatrical-Union representatives, bestow the honors. (Actual theater critics were disenfranchised a few years ago, a move that continues to baffle.) Here then, my unofficial 2013 Tony Award predictions/choices:

Best (New) Play:  A two-horse race between “The Assembled Parties” by Richard Greenberg and Christopher Durang’s “Vanya and Sonia and Masha and Spike,” both blessed with outstanding ensembles portraying serious family issues with generous overlays of humor. “Vanya, etc.” is my prediction, but Greenberg’s play would be my choice.  I had never heard of the “Parties” family going in; two hours later I knew them as well as my own.

Best (New) Musical:  The most visible Tony Award might be the least-witnessed, coming as it does at the end of the telecast, so get some sleep: “Matilda: The Musical” is odds-on against the juvenile “Bring It On,” the frivolous “Kinky Boots” and  the seasonal “A Christmas Story.” Despite irritating diction lapses from the singing children, “Matilda” is an accomplishment of the highest order. [The Roald Dahl story isn’t all lightness and mirth. I recommend it for kids of at least double-digit age.] 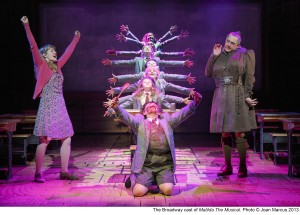 Some of the "Matilda" kids, with Lauren Ward, left, and Bertie Carvel

Play Revival:  “Golden Boy” continued playwright Clifford Odets’s retrospective, and “The Trip to Bountiful” made a smooth transition to an African-American setting. “Orphans” was revived, prompting a resounding Why?  “Who’s Afraid of Virginia Woolf?” was not only the best revival of the season, it was that play’s best revival in decades.

Musical Revival:  “Pippin” prevails here against over-hyped “Annie,” over-long “Mystery of Edwin Drood” and over-titled “Rodgers and Hammerstein’s Cinderella.”  Directed by Diane Paulus, who won this Tony in 2009 (“Hair”) and 2012 (“Porgy and Bess”), “Pippin” folds top-notch Cirque acts into its tale of a young man’s restlessness. The colorful revival is peerless entertainment. 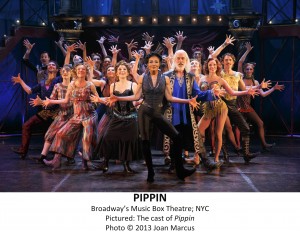 Leading Actor/Play:  There is no nicer fellow in show business than Tom Hanks, a quality that could net him a Tony Award (for “Lucky Guy”), but Nathan Lane is brilliant as a mincing burlesque comic in “The Nance,” and David Hyde Pierce is outstanding in “Vanya.” Tracy Letts re-defined the character of George in “Virginia Woolf,” and, in fact, the play.  He’d be my choice, but I predict Broadway’s home-grown treasure, Nathan Lane.

Leading Actor/Musical:  Cross-dressing as Miss Trunchbull in “Matilda,” Bertie Carvel won Britain’s Tony-equivalent Olivier Award; he’ll likely capture our Tony as well, even though the casting is essentially a gimmick. “Chaplin” was a mid-season flop, but Rob McClure was a rich, deeply felt Little Tramp…alas, all but forgotten.

Leading Actress/Play:Three admirable contenders include Laurie Metcalf’s scenery-chewing in “The Other Place,” Amy Morton’s Martha (“Virginia Woolf”) and Kristine Nielsen’s wry turn in “Vanya.” (I did not see Holland Taylor’s “Ann,” about former Texas Governor Ann Richards, but a one-actor play is a Tony non-starter.) Then there’s 79-year old Cicely Tyson, back on Broadway after 30 years in “The Trip to Bountiful.” It’s a lovely performance, which, combined with her longevity, will net her a Tony. 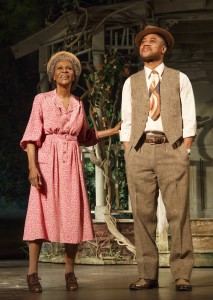 Cicely Tyson and Cuba Gooding, Jr. in "The Trip To Bountiful"

Leading Actress/Musical:  I saw “Pippin” in May, with understudy Stephanie Pope in for Patina Miller as Leading Player. She was quite good and I loved the show. Invited back before the Outer Critics Circle voting deadline in order to see Patina, I returned and was dazzled by her star quality. She won at OCC, and should take home a Tony as well.

Featured Actor/Play:  For his portrayal of the nasty movie producer in “The Big Knife” (more Odets), Richard Kind will win this Tony – not just for his razor-sharp performance, but also to afford a Broadway swipe at the corrupt Hollywood exposed in the play.

Featured Actor/Musical:  Terrence Mann is the early favorite for the King in “Pippin,” but my out-on-a-limb prediction is Keith Carradine from “Hands on a Hardbody.”

Featured Actress/Play:  There is no more fascinating featured role than that of Honey in “Virginia Woolf.” Carrie Coons’s infinitely delicate Honey was eminently Tony-worthy.

Featured Actress/Musical:  I ran into a fellow who did not believe that Andrea Martin would win this Tony for her one scene in “Pippin.” Then the guy showed me the deed to the Brooklyn Bridge he had just purchased.

Best Director/Play:  Having guided “Virginia Woolf” to nominations for Best Revival and for three of its four actors, Pam McKinnon should be a shoo-in here.

Best Director/Musical:Diane Paulus for “Pippin,” although Matthew Warchus (“Matilda”) is snapping at her heels. “Kinky Boots” (Jerry Mitchell, director) is just formulaic fun, and the appeal of “Edwin Drood” (Scott Ellis), was limited.

Among the lower-profile Tony Awards, a few quick picks: Orchestrations will probably go to “Matilda,” but I admired the lush take on “Rodgers and Hammerstein’s Cinderella.” Scenic Design/Play: “The Nance,” for John Lee Beatty’s set that rotates on and off a Burlesque stage. Scenic Design/Musical: “Matilda” beats out “Pippin” and “Kinky Boots.” Costumes/Play: the early-season “Cyrano de Bergerac.” Costumes/Musical: Dominique Lemieux, imported from Cirque in Montreal, for her creatively and seductively costumed “Pippin.”

Tune in to CBS-TV Sunday evening June 9 for the official picks.

1)     Select three alternate winners from among the 19 predictions above. (Limit one of your three from the five “lower-profile” categories at the end.)

2)     Submit your three selections here or e-mail to pdorian18@comcast.net by 12 noon on Sunday June 9.  Entries limited to one per person

3)     Anyone who goes three-for-three against my picks will receive the ten-buck certificate, with two certificates guaranteed: If only one winner, one additional will be awarded from among all entrants in a random drawing; if no three-for-three winner, two names will be drawn.