Two NYC musical shows with similar themes could not be more different in size, scope or style. One, the big-boy, is Motown: The Musical now on Broadway. The underdog is On Kentucky Avenue, which played a couple of tune-up performances last month in a West 42nd Street cabaret prior to a soon-to-be-announced extended run.

One way I compare shows is to consider which one I would rather sit through again. David vs. Goliath alert: re-visiting Kentucky Avenue would be (will be) preferable to sitting through Motown again, and not just because orchestra tickets for Motown go for $142 (drinks extra) while Kentucky tix were $20 (drinks/food extra).

While polar opposites in production values – Motown is a lavish production, Kentucky a modest one – the shows are similar in intent. Both shows re-create a time and place in the pantheon of American popular music. Motown’s cast of 40 performs 50-plus songs in various settings, illustrating that eponymous style of music that flourished from the late 1950s through the ‘70s. Kentucky Avenue is set in Club Harlem on that avenue in Atlantic City in the summer of 1969; a dozen performers do about 20 numbers.

Legendary producer Berry Gordy was the motivating force behind the Detroit music scene that created the Motown sound, and the show (he wrote the self-reverential book) doesn’t let you forget it. Played by Brandon Victor Dixon, snippets of Gordy’s life play out between the ‘Greatest Hits’ parade of fully or partially performed Motown numbers. 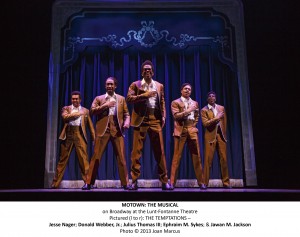 The Temptations re-created in "Motown the Musical"

Names such as Smokey Robinson and Marvin Gaye and groups like The Four Tops and The Temptations are represented, some with extended roles in the piece, others on-and-off to do their signature numbers. Diana Ross, played with respectful similarity by Valisia LeKae, is the leading lady, which apparently she was during Motown’s heyday. (There’s an extraneous bed-scene where Gordy is impotent with her, which represents a first: gratuitous non-sex.)

Established fans of the Motown sound, the show’s targeted demographic, are reportedly eating up the show. The spontaneous singing-along and hand-clapping at my performance attests to that, but to my ear, except for the best-known hits (“My Guy,” “Ain’t No Mountain High Enough,” “I’ll Be There” and others), most of the songs blended into sound-alike status…well enough sung and choreographed, to be sure, but too many all of a piece. One imagines Gordy saying to director-cum-traffic manager Charles Randolph Wright “Hey, we forgot _______ [fill in blank]; let’s add it” a few times too often. Motown: The Musical is tuneful and spirited, but bloated and overlong.

And risking widespread condemnation: Pre-teen Michael Jackson is played by one of two age-appropriate kids (I saw Raymond Luke, Jr.) who beget audience cheers with the first falsetto tone and swivel-spin. Master Luke did a pretty good young Michael…for what seemed an eternity…plus an encore appearance. A decent impression, but if you ever saw Himself on TV back in the day, well, let it go at that.

At the start of On Kentucky Avenue, while the band strums through “Satin Doll,” the cast mills about in street clothes, humming a few bars, dancing a few steps and chatting among themselves. Had I been invited to a rehearsal I wondered? In a way, yes; the scene is a rehearsal for a show that opens that night at Club Harlem, and soon enough the scene, or scenes, shifts to performance nights in the Club. 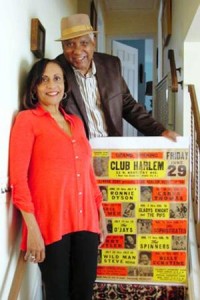 Jazz was king in that time and place, but only about half of the Kentucky tunes are in a jazz mode. Count Basie, to be sure, but Otis Redding, The Supremes and Damita Jo, played by the show’s creator, sultry Jeree Wade, bring R & B into the mix – and some Motown to boot.

The book, by Adam Wade and Ty Stephens, who also plays the singing emcee, is a mini-history lesson; it’s a bridge between numbers that represent the artists who appeared in the Club, who also included the Queen of Soul Aretha, Billy Eckstein and comics Moms Mabley and Slappy White, both represented here by excerpts from their racy stand-up routines.

Highlighted by a dozen original songs as well as standards, intriguing peeks into backstage goings-on and, not least, The Fontaine Dancers and Showgirls in a variety of dazzling sexy outfits, On Kentucky Avenue is as much musical entertainment as anyone could hope for in 75 minutes. Wrapping up the show with Ty Stephens’s take on “Old Black Magic” a la Billy Daniels is icing on the delicious cake.