Forward to the past: “Noir” at NJ Rep

NOIR:  generally ‘film noir’ (‘black film’ from the originating French); crime fiction with sexual undertones, usually featuring a hardboiled private eye or plainclothes cop with a sardonic persona, a firm belief in justice, and a willingness to dole out punishment.

I like noir-ish tales. In my youth I devoured Dashiell Hammett in print, movies and on the radio. (C’mon; I can’t be the only one who remembers Howard Duff’s great voicing of Sam Spade.) And there’s no more noir ending than Mike Hammer shooting the blonde psychiatrist dead at the end of Mickey Spillane’s “I, the Jury.”

As intriguing as they are, some of the best remain plot-fuzzy even after multiple readings or viewings, which is why so many end with someone re-capping the entire story. Examples: Bogart’s Sam Spade to Brigid O’Shaughnessy (Mary Astor) in “The Maltese Falcon” before he “sends her over” (to the cops) and in “I, the Jury,” Mike Hammer to Dr. Charlotte Manning before he sends her over (to where you don’t come back from).

That said, Stan Werse’s new play Noir is a pretty accurate re-creation of noir in its 1940s and 50s heyday, even down to that convoluted story-telling. And as directed with respect for the style by Marc Geller and acted in period-perfect imitations (here, not a knock) of streetwise cops, Noir is good fun. (I’m tempted to say good clean fun because, contrary to the ubiquitous trend, there’s not an f-bomb to be heard.) 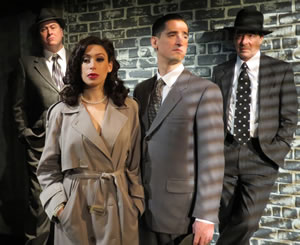 Rookie detective Clay Holden (Darrell Glasgow) is the good guy here. He’s a straight-arrow among a couple of others who are not: Detective McQue (Michael McCoy), who pops in and out of the shadows to keep us up to date on the plot, a largely unsuccessful effort; and boss detective Norbert Grimes (Thomas Grube), who cadges cigarettes and hates to be addressed by his full first name. (Now that makes sense.)

Working more or less together, they delve into and solve a series of crimes that, to everyone’s benefit, including the audience’s, brings into the mix sultry Helen Lydecker, played by sultry Catherine LeFrere. (Great names: reverse ‘em and it’s still noir.) 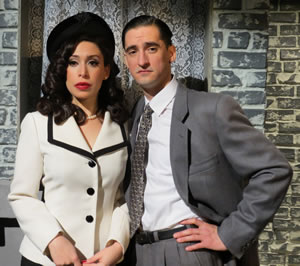 Helen’s purpose is to thicken as well as sweeten the plot, which Ms. LeFrere does handily, modeling an assortment of alluring outfits, all in about 50 shades of black, white and, um, grey. (The whole enterprise is in those shades, accented to perfection by Jessica Parks’ scenic design, Patricia E. Doherty’s costumes and especially Jill Nagle’s expert lighting design and technique.)

You’ll not figure out the ending, even going back over everything later, but it doesn’t matter.  One of the characters even says “I was gonna’ be a math teacher and this doesn’t add up to me.”  As a whole piece, Noir makes little sense, but any ten-minutes of the play’s 90 packs enough noir references to keep you engrossed and amused.  It’s an accurate, nostalgic take-off, but more important, it’s an affectionate one.