In the world of comedy, familiarity often breeds fondness.  If the title of “Old Jews Telling Jokes” was amended to the more accurate “Old Jews Telling Old Jokes,” it still wouldn’t lessen the laughter that follows every – well, nearly every – punch line in this 85-minute revue of Jewish-slanted ethnic humor.  I say ‘Jewish-slanted,’ because with a few changes, many of the jokes would work if framed against any ethnic, religious, professional or damn near any other background (more below).

That said, the accent (pardon the pun) is on Jewish characteristics that fall squarely into the stereotype camp.  Jews and non-Jews alike are advised to check their Politically Correct sensibilities at the door.  (My PC-ness being highly developed, it took me a few minutes to adjust; but once I did, my funny-bone took over.) 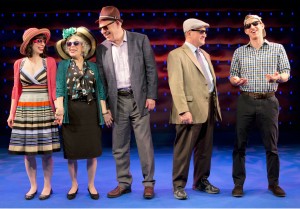 The show is based on an Internet website of the same name; there are no writers listed, which is an oversight only if you can tell me who wrote the first Jewish-mother joke.  The setup doesn’t pretend to be any more than the title promises, although three 70-ish raconteurs (Lenny Wolpe, Marilyn Sokol and Todd Sussman) are joined by two under-30s (Bill Army and Audrey Lynn Weston), who prove equally adept at re-cycling the tried-and-true material. No stereotype is unscathed; rabbis and kvetching wives are among the casualties, as is money-obsessed:

Two Jews see a sign outside a Catholic church offering $50 to convert. One goes in and comes out 20 minutes later. “Did you get the $50?” his friend asks. “Is that all you people think about?”

A man asks his mother to guess which of three women he has proposed to. Mom talks to each for 5 minutes and then picks woman #2. “How did you know?” sonny asks. “She’s the one I don’t like.”

Most of the material is harmless, but there is a surprising amount and degree of adult material, as in sex and coarse language, as well as some questionable sacrilegious gags.  Among the former is a joke about Alzheimer’s and syphilis that leads to an f-bomb punch line (a funny tasteless joke), and among the latter, one about the nails used in Jesus’s crucifixion (an un-funny tasteless joke).

There are a couple of forgettable sung ditties (a pianist is on the premises) and a few interesting personal monologues, which are not only welcome palate cleansers, but which provide insight into the culture and into the Catskills venues where this kind of humor was boffo in the 1950s.

The setup: advising a woman to use a ketchup bottle to practice oral sex. The payoff is visual and has to do with priming the ketchup out of the bottle, via a technique that caused me to wince. Ouch.

So don’t bring the kiddies. But do take yourself; at 85 minutes it’s a just-right pre- or post-dinner entertainment.

About some of the material’s crossover adaptability: I was reminded of when I did standup comedy years ago in the Army. To accommodate a couple of shows a week, I’d borrow (okay, steal) jokes from whatever comic was on TV with Ed Sullivan or Jack Parr and re-cast them, substituting Army personnel for such as mothers-in-law or traveling salesmen.

An Alan King gag, for example [My mother-in-law stayed in my house while I went away. “Treat it like your own,” I said.  She did; when I got home, she had sold it!] works just fine with First Sergeant standing in for mother-in-law, especially for an audience of E-3s and Spec 4s.

And this one from “Old Jews Telling Jokes:”  “Rabbi, I think my wife is poisoning me.” The rabbi offers to talk to her. The next day, the rabbi says “I had a three-hour talk with your wife.”  “So…what’s your advice?” “Take the poison.”  Change just one word – from rabbi to Army Chaplain or golfing buddy or boss at work or…you pick somebody.  If it’s funny, it’s funny.