“Timing” off Broadway and “Cat” on…

I first saw David Ives’s All in the Timing at the Alley Theatre in Houston in September 1994 and again a month later at Primary Stages, then on 42nd Street’s Theatre Row.  It’s back again at Primary Stages, now at 59 East 59th Street.  Since ’94, I’ve seen five other productions, including three in Monmouth County NJ: by the professional Two River Theater in 1996; Holmdel (Community) Theatre in 2000; and by Monmouth University students in 2007. All were quality productions. 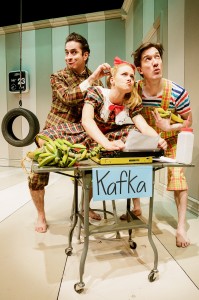 Monkeying around in "All in the Timing"

The work brings out the best in professionals and amateurs alike, which is not to suggest that the six short plays, selected from the 14 that comprise Ives’s “All in the Timing” collection, are easy or simple-minded.  On the contrary, they are extremely intelligent vignettes. What impels even the most humble production, as if through osmosis, is the universality of their themes and the accessibility of their language.

And what language it is: economical and immeasurably funny.  Ives’s pinpoint selection of words and phrases has a dazzling, spun gold quality, like “a fresh breeze after a humid August day,” another critic has written.  That may seem modest praise until one realizes how few theater pieces fit the description.

Directed by John Rando (Tony Award for Urinetown) at a sprightly pace, and acted accordingly by a cast clearly enjoying themselves (a risky observation, but safely applied here), the current revival hits all its marks.

In “Sure Thing,” a man (Carson Elrod) approaches a café table where a seated woman (Liz Rooth) is reading a book. “Is this seat taken?” “Yes,” she answers curtly. A bell rings. He asks again. “No.”  Subsequent approaches, rebuffs, bells and revisions eventually get him seated. What is she reading? The Sound and the Fury, she tells him.  “Ah yes, Hemingway…”  Bell.  “Faulkner…”  Other awkward comments, put-off answers, the bell, and better answers follow, including Oral Roberts University morphing into Harvard.  Imagine on-the-spot editing of what you said into what you wish you had said: if only.

Then there’s “Words, Words, Words,” in which monkeys named Swift (Mr. Elrod), Kafka (Ms. Rooth) and Milton (Matthew Saldivar) sit at typewriters in service of the classic hypothesis that one of them will eventually type the complete “Hamlet.”  Here, they’re aware of that goal, but aren’t sure they’ll even know if they do it.  As they do indeed produce snippets of Shakespeare, “Paradise Lost” and other classics, the concept of infinity is reduced to 12 minutes.  It works. 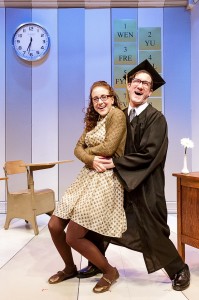 In “The Universal Language,” timid pupil Dawn (Jenn Harris, fresh from her inspired parody of Jodie Foster in Silence: The Musical) responds to an ad offering instruction in a new universal language.  Beginning with “Velcro!,” (Welcome!), instructor Don (Elrod again, more than up to the evening’s heavy lifting) speaks only in Unamunda, which at first seems to be gibberish, but gradually takes on such clarity that Dawn comes to understand Unamunda. So will you.

All in the Timing is a satisfying diversion on every level.  It’s soul food for the brain.

Theatrical revivals invite comparison with the originals, of course, but some shows are revived so often that comparisons are less to the originals than to prior revivals.  The 2009 “Guys and Dolls,” for example, didn’t stand up to the Nathan Lane/Faith Prince-inspired 1992 revival, never mind the original (which I did see, btw).

Now there’s Cat on a Hot Tin Roof, hot on the heels of revivals in 2003 and 2008, neither of which was definitive, but each of which had certain strengths. In 2003, Ashley Judd was in over her head as Maggie the cat, while Anika Noni Rose was more credible in the all-black ’08 version.

The current effort stars Scarlett Johansson, who is, if you can believe it, an un-steamy Maggie. Everything about this should-be fiery woman should be internally driven, but here even Scarlett’s ethereal beauty is only skin deep.  And she plays the chatterbox first act at a pace that suggests a pending dinner date. 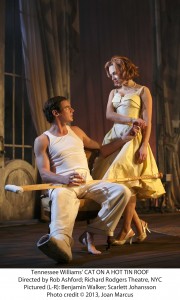 Scarlett Johansson and Benjamin Walker as Maggie and Brick

Johansson is not helped by her leading man.  Brick, Maggie’s alcoholic husband, is deceptively passive for much of the play.  Neither Jason Patric (opposite Judd) nor Terrence Howard (with Rose) was compelling in the role, and the current Brick, Benjamin Walker, was accurately critiqued by my companion as “a cipher.”

Big Daddy, the patriarch of the family into which Maggie married, might be the most compelling mature male role in American theatre.  Ciaran Hinds, whose credits center around appearances throughout the United Kingdom, is the current Big Daddy.  He’s big in neither girth nor projection.  One could imagine him as a kindly grandfather, but here he’s not even doing gruff.  In ’03, Ned Beatty was outstanding, and in ’08, James Earl Jones was Big Daddy…and vice versa.  As strongly as I recommend All in the Timing (at half the ticket price), I cannot urge anyone into Cat On a Hot Tin Roof.