“Picnic” on Broadway: Live and in the Flesh

Stage musical adaptations of non-musical movies have become ubiquitous on Broadway over the last dozen or so years. Some succeed as worthwhile entertainment; “Hairspray” and a couple of Disney productions come to mind. Some achieve sustainable mediocrity (“Legally Blonde”), and some are disasters (“Ghost”).  Regardless of the odds-against, the gambler instinct drives investors ever more into the breach. (“Diner” and “Sleepless in Seattle” are among those in planning stages.)

By adding song and dance, the shows are able to side-step direct comparison with their film sources, particularly with the flicks’ definitive scenes. Straight plays from non-musical movies are a whole other close-up. Plays based on “On the Waterfront” in 1995 and “The Graduate” in 2002 were busts (even with James Gandolfini as Charlie in the former and Kathleen Turner as Mrs. Robinson). The projects were ill-advised at best, and attempts to override certain iconic scenes made them laughable. “I coulda’ been a contender” and “You’re trying to seduce me, Mrs. Robinson” from mouths other than Brando’s and Hoffman’s? Give us a break.

Which brings us to the current Broadway production of “Picnic.” The 1955 movie is perfection; trying to replicate it on stage would be a fool’s errand but for two factors: first, the movie is rarely screened these days. Second, and most important, the play came first. William Inge’s “Picnic” won the Pulitzer Prize for Drama in 1953 (but not the Tony Award, which went to “The Crucible”). 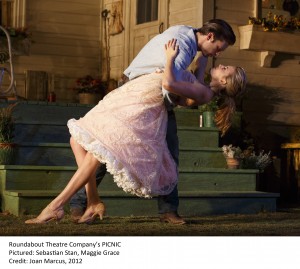 The play “Picnic” was bold in its day, as was the film, which was expertly expanded…and not watered down at all. The humdrum lives of a clutch of women in a sleepy Kansas town are disrupted by the appearance of Hal Carter, a hunky drifter whose raison d’etre, it would seem, is to bare his chest. Hal’s combination of roughneck manners and underlying sexuality sends the women a-flutter, especially Madge, herself simmering under the pressure of being regarded as an object of beauty and little more.

Hal becomes the catalyst for the women’s introspection (at least); that he and Madge will couple-up is obvious from their first exchange of glances, but it’s a circuitous, doubtful route they take to togetherness, in an ending that leaves as many questions as it answers. (In case you’re wondering, that is a good thing.) 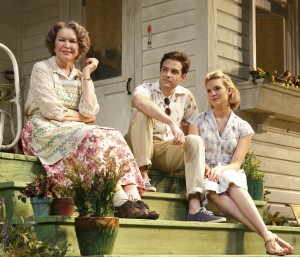 Maggie Grace might be as pretty a Madge now as Kim Novak was then; she is indeed a vision of loveliness who does just enough to make Madge’s angst seem earned. A few of the secondary roles are expertly acted: Elizabeth Marvel and Reed Birney create heartfelt human comedy as the ‘old maid’ schoolteacher and her reluctant suitor, while the peerless Ellen Burstyn is solid as neighbor Helen Potts, the most grounded Inge woman on the premises.

Stage neophyte Sebastian Stan plays oiled-up (externally) Hal as a Stanley Kowalski/biker type in jeans low-slung enough to have required a bikini wax. This Hal’s sculpted bod distracts the women in the play, alright, but the precarious set of his jeans – and his posing in them – becomes a distraction from the play itself.  Also, his coarseness trumps his likeability; could Madge be that eager to give it up?

Excepting the awkward take on Hal, who’s more a cold statue than a warm being, director Sam Gold has been true to the original in style and tone, enhanced by Andrew Lieberman’s superb back-porch set. The play may be dated, and its movie adaptation is superior, but ‘old-fashioned’ can be appealing, and really, who today has seen the movie anyway?