It’s No Mystery: “Drood” Is a Dickens of a Show

Charles Dickens hadn’t finished writing The Mystery of Edwin Drood when, on June 8, 1870, he suffered a stroke and died at age 58. At the point where the novel stopped, there was no evidence pointing to Drood’s murderer or even that a murder had been committed. That did not stop Dickens aficionado Rupert Holmes from tacking an ending on the tale and turning it into a stage musical in 1986.

Actually, the composer/lyricist/librettist had help crafting the ending. Make that has help, because at the three-quarter mark of every performance, the audience gets to vote on whether or not Drood got whacked and, if so, by whom. 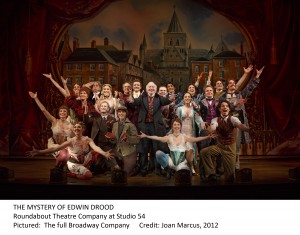 "The Mystery of Edwin Drood" cast

Holmes’ second departure from Dickens was to offer the musical as if it were being performed in a London Music Hall in 1873, complete with such conventions as having an on-stage “Chairman” to comment on the action and a woman in the role of Edwin Drood.

The pluses and the minuses of the Tony-winning Best Musical lie in the collaboration. Allow me, dear reader, besides that Dickensian form of address, to suggest that those pluses and minuses are just about evenly split between the original and Holmes’s contribution. In the current Broadway revival, the Music Hall spirit is replicated to a tee, while the original plot details are, shall we say, fuzzy. By intermission, I wasn’t sure who was what to whom, but I’d had such a good time for 90 minutes that I didn’t care.

Opening with a rousing ensemble number, the story centers on lascivious Uncle John Jasper’s attraction to his niece Rosa Bud, who is engaged to Edwin. Various other romantic and/or lustful entanglements figure in: a pair of Ceylonese twins, an old sot and his addled son and…some other types. (I told you I had trouble following it.) 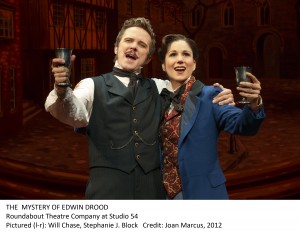 Will Chase, left, as John Jasper, and Stephanie J. Block as Edwin Drood

It’s the upbeat, happy musical carryings-on to the accompaniment of the brassy 18-piece orchestra (band, better) that punches the show along. Act two, for example, opens with a full-out song-and-dance aptly titled “An English Music Hall.” Up-tempo, happy, delightful.

Later in the act, right in the middle of “Don’t Quit While You’re Ahead,” the show quits while it’s ahead, presumably at the spot where Dickens expired. The audience voting that follows isn’t exactly tedious, but with three items to be resolved, including one that’s irrelevant, it’s at least over-extended.

Q#1: Has there been a murder? Yea or nay. #2: Who’s the killer? (The #1 yea vote is a given.) And then, for some unknown reason, Q#3 to select an enduring couple among the characters. Admittedly, the audience seemed to enjoy this one, but with multiple potential matches among the dozen principals, the sequence goes on too long to no particular effect.

Back to the pluses:  With one exception, none in the cast is a household name, but several are A-listers: Stephanie J. Block in mufti is a spiffy Mister Drood, the distinctly female Betsy Wolf is the distinctly female Rosa Bud, Jim Norton is a droll Chairman, and Gregg Edelman is a hoot as an addled minister. Venerable Chita Rivera’s turn as the Madame of an opium den is, well, venerable.

Warren Carlyle’s choreography and Scott Ellis’s overall direction capture the look and feel of a nineteenth-Century British Music Hall. (You know different?) And, as I point out from show to show, the uber-talented and attractive gaggle of chorus gypsies define the Broadway musical.

Drood has been extended to March 6 at the post-Warhol Studio 54, which, decked out as that 1800s Music Hall, is itself a sight to see.