I’ll admit it; I’m a fan of Annie, especially the catchy score by Charles Strouse (music) and Martin Charnin (lyrics). “Tomorrow” may be a hackneyed anthem by now, but that song, along with “NYC,” Easy Street” and “You’re Never Fully Dressed Without a Smile” stick in my brain for days after seeing the show.

So it was in 2004 at Paper Mill Playhouse and in a 2011 community production in Red Bank, NJ (Phoenix Productions). Both of those revivals were musically secure and, more important, played Thomas Meehan’s book without condescension to a juvenile audience.

I expected the same buoyancy with the current Broadway revival, but it ain’t so. To be sure, most of the youngsters perched on the Palace Theatre booster seats (a welcome amenity) enjoy the show – my eight-year old granddaughter did – but they’re not aware that they’re being talked down to. 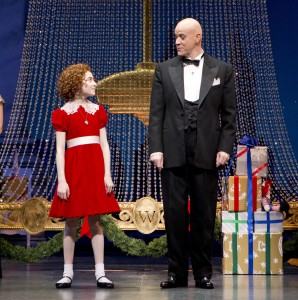 Not by Annie (energetic Lilla Crawford) and the other six orphanage moppets; they’re unaffected, button-cute and scary-talented. It’s James Lapine’s over-stated direction, exemplified by Katie Finneran’s over-the-top Miss Hannigan, whose amusing relationship with her hated chargers is obscured by a flurry of boozy antics.

Among the other principal adults, the Australian star Anthony Warlow, in his Broadway debut, is a fine Daddy Warbucks, and Brynn O’Malley elevates the secretary role (Grace Farrell) to leading-lady status. But as Rooster and Lily, Clarke Thorell and J. Elaine Marcos are in the misguided more-is-more camp. (They bring it down a notch as Annie’s fake parents, to good effect.)

So…expected a lot and got, well, mediocrity. When even ‘Star to Be’ is merely ordinary, you know all of Annie is.

Two days later, having heard that Scandalous was an aptly titled Broadway ego trip for Kathie Lee Gifford, who wrote the book, lyrics and some of the music, I left my high expectations at home and was pleasantly surprised. Elevated by a pretty good first act, especially the first half thereof, the show about the life and times of 1920s evangelist Aimee Semple McPherson isn’t the disaster it was cracked down to be.

For starters, Carolee Carmello, onstage throughout the show, is a potent presence. Featured solo or in duet on 18 of the show’s 26 musical numbers, she’s pulling operatic-level duty here, and while the story is in outline form (as stage biographies must be), she acts the iconic preacher’s trajectory with conviction. 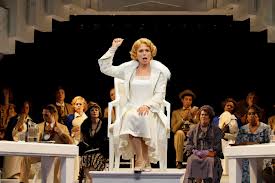 An opening tableau presages the trials (figuratively and literally) to come. “She saved my life,” someone attests. “She’s a liar and a fake,” declares another, before we flash back to Aimee’s Canadian childhood. From there, the facts of her life, assuming accuracy here, are the stuff of real drama. Gifford’s book gets off to a good start.

Aimee’s unrelentingly pious mother rejects Aimee’s turn from Biblical orthodoxy to Pentacostal holy rollerism, a conversion spurred by the charismatic preacher who became her mentor and first husband. That relationship, from their meeting to his death from malaria a few years later, is fully developed, acted and sung by Carmello and Edward Watts, whose couple-chemistry is palpable.

As the story progresses, soap opera and melodrama take over, but there are compensations. George Hearn, who had played Aimee’s father in mufti, re-appears as Aimee’s misogynist/racist competition; Roz Ryan’s transition from brothel madam to Aimee’s right hand is believable; and a six-woman ensemble is a treat, morphing from sexy singing/dancing whores into Aimee’s bible-thumping acolytes in less than fifteen seconds.

Another musical about a maverick preacher opened and closed on Broadway last spring. The elaborate Leap of Faith featured a bravura performance by Raul Esparza as a fallen-from-grace preacher man. Both Leap and Scandalous are flawed works, but where Esparza was a band-beater throughout, Ms. Carmello injects nuance into the complex woman whose good works, if not a stainless reputation, outlasted her.

We learn in an epilogue that Aimee Semple McPherson died in from an “accidental overdose of barbiturates” on her 54th birthday in 1944. Her Foursquare Gospel church denomination survives to this day, claiming a membership of more than eight million…souls.