“Becky’s New Car” Is Worth a Test Drive

In 2010, Steven Dietz was said to be tied (with Tennessee Williams and David Mamet!) for eighth on a list of the ten most-produced playwrights in America (excluding Shakespeare…whew).  The Dietz I saw in ‘10 was Yankee Tavern, an overwrought 9/11 conspiracy-theory treatise at New Jersey Repertory Company.  How pleased am I now to discover a Dietz play with as many laugh lines as Tavern had boring ones.

Becky’s New Car is far from a great play.  It’s an extended domestic sitcom with an over-obvious symbolic theme, but as cleverly staged at Circle Players in Somerset NJ, it’s an altogether satisfying diversion. The story is simplicity itself, but the twists and turns hold your interest.

The title symbolism is punched up at the start. When a woman wants a new job, Becky (Gloria Lamoureux) confides, she really wants new shoes, and a new house equates to a new husband. But a new car? That’s a stand-in for a whole new life. We then follow Becky on an adventure that involves a car reference every thirty seconds or so, in case we weren’t listening.

Becky is closing the auto dealership where she’s the office manager, when Walter (Charles Deitz, ei to the playwright’s ie) barges in, announcing his wealth by purchasing nine cars to present to his employees the following morning. In the course of their conversation, Walter comes to believe that he and Becky share the status of widowhood. Although solidly married, Becky does not disabuse the smitten Walter of that notion, and the comedy is off and running.

‘Running’ is an apt description of the first act, which flies by quickly. The misunderstanding that coulda/shoulda been straightened out at the start is written and acted into believability and, once accepted, becomes the principal ingredient of an amusing farce. 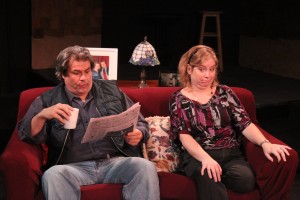 Under Eric Walby’s sharp, attention-to-detail direction, the acting is uniformly good. (The car salesman is a bit ‘outré,’ but chalk that up to the hyper character.) The perfectly cast Ms. Lamoureux is up to the heavy lifting. More than just likable, which she is from the start, her Becky is a real, warm human being. She also shares with the two men in Becky’s life a fine-tuned sense of comedy timing.

The two men, Maschi and Deitz, create contrasting types by trusting the material and holding histrionics in check. How good they both are is brought home when they imitate each other leaving voice mails for Becky. The scene is a comic highlight.

Martinez and Riche give ‘opposites attract’ a good name. The characters are poles apart, but darned if you don’t root for them as a couple. Ginger could be a sad case, but Mahon captures her resiliency. A well-played cameo scene with Boyer’s reluctant sales guy hints at a happy ending for both of them.

Several audience-interaction bits were pulled off on opening night without a hitch. Lamoureux is particularly adept at the technique, although it shouldn’t take forever for four women to help her change her dress.

Near the end, the play gets all serious on us, and an overlong, convoluted monologue about the unseen Mrs. Tipton may help resolve the plot, but it’s a cop-out by the playwright. A sophomore English major could wrap up the situation in a more tidy fashion.

In her program bio, s/m Sudfield thanks the cast for their punctuality, which suggests that she, director Walby and producer Jon Heron ran a tight ship. The discipline shows on stage. Becky’s New Car is a minor work, but this production gets a lot out of it.