Before the opening night performance of Phoenix Productions’ Ragtime, producer Tom Martini asked the audience for lenience in judging the show in light of the rehearsals lost to the hurricane. He needn’t have bothered. It’s not that the show is perfect; few are. But the occasional glitch – a delayed entrance here, a botched tech cue there – pale in comparison to the high quality of Phoenix’s product.

Ragtime is not an easy show to stage at any level, never mind Community Theater. As if a cast of 50 isn’t daunting enough, those 50 are split into three different racial/ethnic/social groups, each with its own Ensemble; the acting, scenic and costume styles must evoke 1906 America; and the musical score borders on operatic. Phoenix hits all those marks.

Three separate but interlocking stories are at the heart of Ragtime, adapted from E. L. Doctorow’s 1975 novel. A white, upper class New Rochelle family’s complacency is shattered by the discovery of an abandoned black baby, the son of a woebegone young woman and a Harlem piano player. Meanwhile, a widowed Jewish immigrant and his young daughter arrive at Ellis Island from Eastern Europe in search of the American dream. 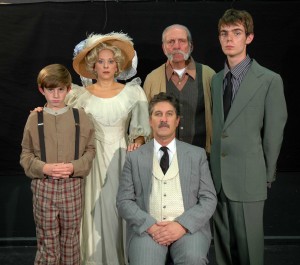 The stories, individually and as they converge, are engrossing, and the songs flesh out both character and plot. The shows creators, Terrence McNally (book), Stephen Flaherty (music) and Lynn Ahrens (lyrics), are at the top of their game.

Christine Paccillo is Mother, whose yearning for independence begins with the discovery of that baby. Paccillo plays the woman’s burgeoning feminism well – and sings her arias, “Goodbye My Love” and “Back to Before,” even better. In Martin Grubman’s nicely shaded performance, Father just doesn’t get it, although a glimmer of compassion finally creeps in. 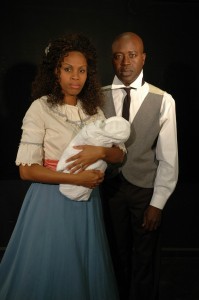 As Coalhouse Walker, Jr., the ragtime pianist driven to violence by overt racism, Aaron Lee Battle is tender toward Sarah (the “Wheels of a Dream” duet with Devin Joi Mullen is lovely) and commanding toward his adversaries (“Make Them Hear You” resonates). The third protagonist is Tateh (Yiddish for papa), whose trajectory parallels the origins of the American movie industry. Ken Wasser’s performance is spot-on, from his accent and humble demeanor (both just enough) through to his new-found confidence. Wasser’s soaring tenor scores well, especially in contrast with Paccillo’s clear tones and Grubman’s fine, mellow baritone. 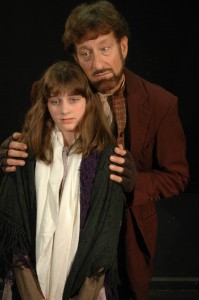 Tateh and his daughter

Several others make big-time contributions. Nicholas Wainwright is excellent as Younger Brother, who represents the nascent left wing of the 1930s; Owen Doherty and Felicia Russell, both 13, belie that age with accomplished work as Mother/Father’s son and Tateh’s daughter. Grandfather (Paul Caliendo) tosses in some welcome humor, and as Sarah’s Friend, Diane Parker and the African-American Ensemble bring down the first act curtain with a stunning “Till We Reach That Day”

Portrayals of actual luminaries are woven into the scenario, among them Harry Houdini (Joseph McCabe), Henry Ford (Michael Dalberg), J. P. Morgan (Bruce McKillip) and Booker T. Washington (Phillip-Mychael Bonds). Activist Emma Goldman is richly acted by Gina Scherzo, and the infamous Girl on the Swing, Evelyn Nesbit, played with a blend of sexiness, sweetness and sadness by Jennifer Townsend, exemplifies the fascination with tawdriness that permeated the decade.

Evelyn Nesbit, The Girl on the Swing (Photo: Rich Kowalski)

Phoenix has taken a bare-bones minimalist approach to the scenic elements, and it works. Designer Ashley Cusack’s exteriors and interiors are suggested by platforms and a few set pieces. Some bare-framed items come to seem as solid as the real thing. Costumes (Sue Hawley) are specific not only to the era, but to each group’s status as well. Anthony Calicchio’s resourceful lighting design also helps to define time and place.

There’s not a lot of dance as such in Ragtime, but what’s there is choice. I suspect that choreographer Jessica O’Brien worked with the director on the opening number, which is a stirring evocation of the early 20th Century American melting pot. Musical director Robert Sammond’s 16-piece orchestra navigates the score sensitively. The recurring ragtime theme haunts for hours after the final curtain.

We’ll not list the names of all 75 or so cast and crew members who contributed to the success of the show, but you know who you are, people. Consider yourselves praised, each and every one.

Changes in musical tastes have always accompanied social shifts…and vice versa. Think of swing in the 1940s; then Doo-wop, Elvis, the Beatles, Rock, Rap, Hip-Hop. This show uses music as metaphor as well as any in memory. In Ragtime, the insensitive New Rochelle father asks, “When did they change the song?” While you weren’t looking, Dad…while you weren’t looking. The message of E. L. Doctorow’s novel is well represented by this play and by this production.