The rapid-fire delivery of an uninspired translation robs the current Broadway revival of Cyrano de Bergerac of its poetry. The result of that double disregard is the reduction of Edmond Rostand’s 1897 masterpiece to an earthbound staging of a theatre piece with the potential to soar.

Familiarity with stage classics creates high expectations; it’s unfair to audiences – and to the works themselves – to dilute those expectations in the name of…what?  Modernization? Innovation?  Whatever, a Cyrano without the character’s iconic rhapsodic litany of big-nose put-downs (“When it bleeds, the Red Sea”) or the delicious line that punctuates his ballade and skewering of Valvert (“Then as I end the refrain, thrust home”), does a disservice to the play. 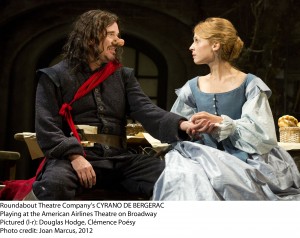 If some semblance of either of those iconic speeches and of other graceful images is retained in Ranjit Bolt’s translation from the French, it sped by me in the race-car delivery by Douglas Hodge. A widely acknowledged accomplished actor, most recently for his award-winning 2010 Broadway debut in La Cage aux Folles, Hodge appears here, abetted by director Jamie Lloyd, to be trying to keep pace with a perceived 21st Century impatience. The result is the loss of reflection; one feels edgy throughout, straining to discern the word-music.

Just as his nose is twice (or thrice) normal size, Cyrano himself is larger than life, and Hodge does capture the character’s flamboyance from the start, his unusual entrance into Rostand’s 17th Century Parisian tavern-theatre, where he chases an incompetent actor off the stage. Thus the stage is set for Cyrano, dashing in all aspects but appearance, to ghost-write the romantic verse that wins the heart of his beloved Roxane for the vapid Christian de Neuvillette. Cyrano is “on the rack of being my own rival,” a favorite line which, if spoken here, zoomed by me.

As written, both Roxane and Christian are less than scintillating personalities; acting them as more than props is a challenge, unmet here by Clemence Poesy and newcomer Kyle Soller. 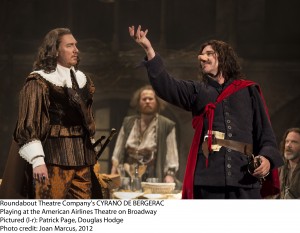 Among the pluses is the Comte de Guiche of Patrick Page, who transitions smoothly from the Broadway Spiderman’s nemesis to Cyrano’s. The first act sword fight and act two battle scenes register as well; would that the romantic verse did as well. A Cyrano at Stratford, Ontario a few years ago, captured in Anthony Burgess’s more traditional translation, was symphonic. This one is atonal.