A kingdom for a stage: “Henry V” at Two River Theater

Henry V is not one of Shakespeare’s most poetic plays; nearly half is in prose. Neither is its plot complex; the story is outlined in the first two scenes and unfolds in a straight line. It is, however, a fitting wrap to the Bard’s Henriad, a cycle of four plays that begins with Henry IV usurping Richard II in that play and carries through the two Henry IV plays.  Through those plays, Prince Hal (Harry to his Boar’s Head Tavern friends) matures from Falstaff’s irresponsible, carefree cohort to the brave warrior, skilled strategist and fine orator he becomes in his own play.

One needn’t be familiar with Henry’s back-story to appreciate the endgame, but it helps, and Two River Theater’s production does a service by showcasing a Henry who’s boyish at the start and even, although less so, at the end. It’s a very appealing concept by director Michael Sexton, brought to life in the vibrant performance of Jacob Fishel. 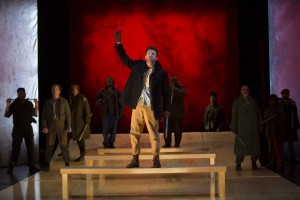 Egged on by the Archbishop of Canterbury, Henry sets out to add France to his British empire.  A mocking gift from the Dauphin, the French king’s son and would-be heir, doesn’t help the French cause. A teed-off Henry goes on the attack and, to the cry of “God for Harry, England and Saint George,” invades France, sacking the town of Harfleur.

Later, on Saint Crispian’s Day 1415, outnumbered five-to-one, “we few, we happy few, we band of brothers” prevail at the battle of Agincourt and claim France for England. (In reality, that war slogged on for five more years. The fictionalizing of history didn’t begin or end with Shakespeare.) And, in a supreme brother-in-law gotcha, Henry marries the French king’s daughter, the Dauphin’s sister.

Fishel is a compelling Henry, despite his youthful appearance and relatively diminutive stature.  Despite, that is, or partly because of those characteristics, for which the actor compensates with vigor, a common touch and…what’s the word? Charisma. Henry V was loaded with that and so, in his playing, is Fishel.  Complemented by a few excellent supporting performances, his Henry is convincing at court and commanding in the field. He’s also realistically insecure at courtship, as his wooing of Katherine (Ismenia Mendes) reveals in the exquisite final scene that mirrors romantic awkwardness to this day.  (Shakespeare knew everything.)

Fishel is more effective in give-and-take scenes than when dealing with Henry’s soliloquies, which, in fairness, do not compare to Hamlet’s. Some of the play’s longest speeches have been edited here, to [purists beware!] no ill effect, but still, boredom sets in from time to time. Fortunately, the many action scenes, both verbal and physical, are well staged and acted, keeping things moving apace.

Among the supporting players, Geoffrey Owens stands out as both the Archbishop of Canterbury and Pistol, the surviving member of the play’s three reluctant warriors, whose comedic wordplay is overshadowed by their antic behavior. (Duly noted, they delight the audience.)  Evander Duck, a former stalwart of Monmouth County community theater, impresses as the French King, who maintains his dignity in the face of defeat. 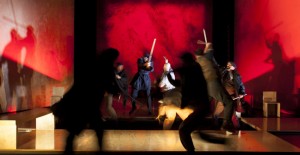 The battle at Agincourt

Two women play a total of 7 roles, Suzzanne Douglas in five of them. She appears as Chorus, the playwright’s stand-in (Shakespeare himself may have originated the role), who introduces each of the five acts (done here in two). She also shows considerable range as the bawdy Tavern hostess Nell and the regally composed French Queen.

Ms. Mendes plays Boy, who fights beside the men and personalizes the sadness of war in general. Mendes is perfection as the lad; can Rosalind or Viola be far behind. Her Katherine is a delight, although she is short-changed by the casting of a man as her attendant Alice, shifting the focus of the English-lesson scene from her to a mincing fellow in drag. (A cross-gender Alice may have been de rigueur in 1598, but it’s a faux pas this month in Red Bank.)

Between the cast of 14 in a total of 33 roles and the men-in-suits modern dress, the who’s who at court, and even on the battlefield, can be confusing, but Mr. Sexton’s resourceful direction and the play itself sort things out before bewilderment sets in.

Henry V has been played as glorifying war, most notably in Laurence Olivier’s 1944 film version (intended as a World War II morale booster for Britain). Conversely, a distinctly anti-war production in Stratford, Ontario peopled the play with a band of very unhappy brothers in Vietnam.

But the play is neither pro- nor anti-war; it is about war and the men (solely men back then) who wage it, warts and all. Henry, for example, threatens lurid retribution if Harfleur doesn’t surrender, and at Agincourt, lacking enough men to guard French prisoners, he orders his soldiers to simply kill them.  (The Agincourt slaughter was missing in Olivier’s version; it’s intact here – graphically.)

Two River’s Henry V doesn’t come down on either side of the ‘war’ question. To be sure, we root for Henry; he’s a heroic figure in the classical – or any – sense. But the epilogue, about Henry and Katherine’s firstborn presiding, through ill-intentioned advisors, over the bloody Wars of Roses, is a dose of reality.  Individual soldiers may be valiant, but war is hell.