Timeless Playwrights and Musical Treats North of the Border

Since its 1962 founding in scenic Niagara-on-the-Lake, Ontario, the (George Bernard) Shaw Festival has expanded several times.  Originally only Shaw plays, the Festival now includes later-written plays set in his lifetime (1856-1950). Last month I saw Shaw’s “Misalliance” and the 1998 Broadway musical “Ragtime,” set in the early 1900s.

“Misalliance” is one of Shaw’s most popular plays, not least because it’s the only one of his – or anyone’s – in which an airplane crashes into a house, ‘dropping’ a handsome young pilot and his passenger, Lina Szczepanowska, a provocative Polish acrobat whom every man in the play attempts to seduce (after first mis-pronouncing her name), into the lives of the residents.

The Tarleton family is coming to grips with daughter Hypatia’s engagement to Bentley Summerhays, an upper class nerd (before nerd was ‘in’).  The play is set in 1909, but the intervening Century hasn’t dimmed its relevance.  After all, parental concerns about their offsprings’ mis-matches have always and will always be in play…and plays.

The misalliances here span generations.  Hypatia’s mother has tolerated her husband’s philandering for years, and Bentley’s apparently upstanding father has also had affairs, one of which it would be unfair to reveal in a review.

Hypatia’s engagement is the principal topic of the first act, which contains plenty of Shavian wit, but tends toward dry.  Fortunately, the act ends with that airplane crashing the party, and act two is a faster-paced jig-saw puzzle of sharp exchanges and shifting relationships, with irrepressible Lina (the striking Tara Rosling), a willing catalyst.  The resolutions may seem like foregone conclusions, but there are surprises lurking in the Tarleton household, and getting to those resolutions is lots of fun.

Shaw is a gold medalist in the turn-of-phrase Olympics.  You know that sense of having always known what you’re hearing for the first time?  Or of feeling exactly the way a character describes him or herself?  Much of Shaw works that way.  “I want to be an active verb,” Hypatia says. Who doesn’t?

Three separate stories weave through “Ragtime,” just as they did in E. L. Doctorow’s 1975 novel from which the musical is adapted.  Set at the turn of the last Century, “Ragtime” is a seamless blend of Stephen Flaherty’s music, Lynn Ahrens’s lyrics and Terrence McNally’s book.  All three are at the top of their game, and the thrilling production at the Shaw Festival does them justice. 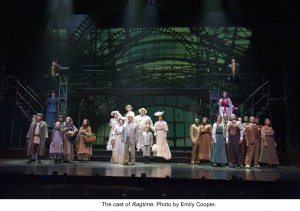 The cast of "Ragtime"

A white, upper class New Rochelle family’s complacency is shattered by the discovery of a foundling baby, the son of a woebegone black young woman and a Harlem piano player. Meanwhile, a widowed Jewish immigrant and his eight-year old daughter arrive at Ellis Island from Eastern Europe and settle in lower Manhattan.

Single-named Mother’s latent feminism, jump-started with the discovery of that baby, drives the play.  “Goodbye, My Love,” she sings as Father leaves on an expedition to the North Pole.  Later she sings “Back to Before,” where, of course, you cannot go.

Coalhouse Walker, Jr., the ragtime pianist, is driven to violence by racist attacks.  His song trajectory is also telling: “Wheels of a Dream” is his hopeful beginning, but by play’s end he’s pushed to “Make Them Hear You.”  The third protagonist, Tateh (Yiddish for papa), arrives in Amereke seeking “Success,” his early song, and ends up singing “Our Children” with Mother.

Actual luminaries of the day, among them Harry Houdini, Henry Ford, J. P. Morgan and Evelyn Nesbit (the infamous Girl on the Swing), are ingeniously woven into the scenario, as is a ragtime melody that permeates the score.

Music is metaphor in “Ragtime.” Changing musical styles have always accompanied social shifts…and vice versa: ragtime, of course, then swing, doo-wop, Elvis, the Beatles, rock, rap. In “Ragtime,” the set-in-his-ways Father asks, “When did they change the song?” While you weren’t looking, Dad. The message of Doctorow’s novel is exquisitely rendered on stage.

With an acting company of 100, Ontario’s Stratford Shakespeare Festival is the largest theatrical repertory company in the world. Among this season’s 13 attractions are one of The Bard’s comedies, “Much Ado About Nothing,” and the Award-winning musical “42nd Street.”

“Much Ado” isn’t fanciful like “Midsummer Night’s Dream” or jokey like “Comedy of Errors.” It is rich in humor and passion, but with its devious scoundrel inciting unwarranted jealousies, it’s a meatier play.

Jealous of Claudio’s social position and his impending marriage to Hero, the embittered Don John hatches a plot to discredit the bride on her wedding day. It works, but after a wise clergyman’s counsel and the bumbling town constables wringing a confession from Don John’s henchmen, justice is served.

Hero and Claudio are sweet young things in the blush of ardor, while Beatrice and Benedick are independent 30-somethings whose cutting exchanges are a triumph of verbal-wit warfare.  There’s no doubt that B & B are meant for each other, but not before they overcome their aversion to the state of marriage.  “That a woman conceived me, I thank her,” says Benedick.  “But,” he reminds, “I will live a bachelor.”   And Beatrice would “rather hear my dog bark at a crow than a man swear he loves me.”  Yeah, right.

Deborah Hay and Ben Carlson as Beatrice and Benedick

The central story revolves around Hero and Claudio’s circuitous route to happily-ever-after, but the play has long “starred” Beatrice and Benedick, so much so that their names have served as an alternate title.

Stratford is blessed with the wonderful Deborah Hay and Ben Carlson, married in real life, as Beatrice and Benedick, whose relationship has been described as “playfully caustic.” Lesser actors have been known to overplay one or the other of those seemingly contradictory qualities, but not here.  One never doubts the mutual attraction even as barbs fly between them.

I’ve seen Ben Carlson previously as Hamlet and Touchstone (“As You Like It”).  There may be Shakespearean actors more lauded than he, but none is better at bringing the plays into today’s sensibilities. Not one inference or scrap of humor eludes him; he owns every turn of phrase. Headed by his Benedick and Hay’s Beatrice, this “Much Ado” is sublime.

Perhaps you disagree with the director of “Pretty Lady,” the musical-within-the-musical “42nd Street,” when he declares ‘Musical Comedy’ to be the two most glorious words in the English language.  But even those who think ‘Perfect Game’ outranks them would be exhilarated by the buoyant musical at Stratford’s Festival Theatre.

The 1980 Tony-winning musical is a nostalgic take on the 1933 Busby Berkeley movie of the same name.  Stage-struck chorus girl Peggy Sawyer (Jennifer Rider-Shaw) gets her big chance when the “Pretty Lady” leading lady breaks her ankle.  The final sentence of the director’s pep talk to Peggy – “Sawyer, you’re going out a youngster but you’ve got to come back a star!” – remains one of show business’s most revered clichés.  (You think it doesn’t happen? Ask Shirley MacLaine, whose stardom began exactly that way.)

The appeal of “42nd Street” lies in its song-and-dance riches set to a dozen tunes by Harry Warren (music) and Al Dubin (lyrics).  “Young and Healthy” and “I Know Now” might not ring a bell, but musical theater buffs and folks of a certain age will recognize “You’re Getting to Be a Habit With Me,” “We’re in the Money,” the blockbuster “Lullaby of Broadway” and the title tune.

And ahhh, the dancing.  The tone is set early, when the curtain pauses on its way up to reveal a line of lower limbs, tap-dancing a complex rhythm in perfect unison.  From there it’s off and tapping for a delightful couple of hours. Much of the action takes place on an actual stage, with scanty scenery, which hardly matters.  (Dancers tapping on and off with tables and chairs for a restaurant scene is a nifty touch.)

There are only so many tap steps, but there are infinite combinations, and Ms. Rider-Shaw seemingly does ‘em all, including backwards.  The Leslie Caron look-alike is surrounded by 15 real-life Peggy (and Pete) Sawyers, all of whom hoof Alex Sanchez’s choreography as if born to it. Two other contributors deserve special mention: the dynamite 15-piece band that gets the show off the ground (literally – they’re in plain sight on a raised platform) and a certain Miss Julie, who, Rider-Shaw notes in her program bio, “taught me how to tap.”  Thank you, Miss Julie.

Condensed from columns written for Heritage Newspapers in Michigan and for www.sceneonstage.com   All the plays run into October. For information brochures: www.shawfest.com  and www.stratfordshakespearefestival.com