Watching “Release Point,” Gino Dilorio’s new play at New Jersey Repertory Company put me in mind of two other works on the same topic: the 1997 off-Broadway play “How I Learned to Drive” and the movie “The Woodsman,” released in 2004.  All three feature 40-ish-year old men who have been guilty of unspeakable acts; all three do manage to speak of those acts without making us squirm; and all three of the male protagonists have redeeming features.

Granting those similarities, Dilorio’s play doesn’t quite rank with the other pieces, but it has a lot going for it.  Neither is Michael Irvin Pollard necessarily comparable to David Morse (“Drive”) or Kevin Bacon (“Woodsman”), but he does justice to “Release Point.”  It is, in fact, among the prolific New Jersey actor’s best work.

Too much detail about the play would be a spoiler; too little a puzzler.  And so, striving for a middle ground: “Release Point” is a baseball-themed play about a father and daughter who re-connect tenuously after his release from prison where he served nine years for a moral infraction. 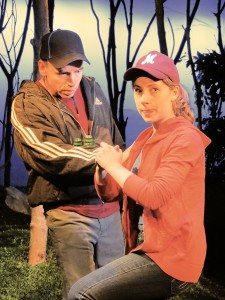 We’re in a grassy glade just beyond a high school ball field, imagined behind the audience.  (What can scenic designer Jessica Parks not accomplish on NJ Rep’s smallish stage? The woman owns the space.)  Mike (Pollard), a former baseball coach forever fixated on The Game, watches his son pitch through binoculars.  (He’s not allowed within 500 feet of the field, a distance which, in a super aside, he measures from home plate.)

Mike’s daughter Kerry (Jenny Vallancourt), herself a pitcher, albeit in softball (“You pitch upside down,” Mike disparages), meets dad there, apparently every day.  On the surface, their conversations center on baseball and young Mikey’s pitching, but at Kerry’s urging, details of Mike’s transgression and its effect on their relationship gradually emerge. The mood becomes unsavory (as does the language – more below), but it pulls back short of gross.

As well acted as they are, the scenes stretch into repetition. Facts, impressions and feelings are stated and re-stated.  Dilorio’s device of having Kerry pause mid-exit to re-hash ground just covered with dad is over-employed; scenes have two endings, when the first one would have worked fine. The very last scene, with two or three aborted exits (I lost count), is the worst offender  The one-act play would be better at 75 minutes than it is at 90.

But well-acted it is. Pollard’s Mike is intense, but not oppressively so.  He’s troubled by his past and his ongoing instincts toward the anti-social (putting it mildly) behavior that he needs to control.   When the going gets tough on Mike, he retreats into baseball lingo, which is authentically written and acted comfortably throughout.

Kerry is controlled around her father; she’s wary, both of his physical presence and her own thoughts and feelings toward him.  It’s all inside her.  Kerry’s calm exterior is in marked contrast with her roiling insides, and Vallancourt captures both elements of the conflicted young woman. It’s excellent work.

A third role, small but important, is being played by six different adolescent girls over the run of the play, a ‘device’ that spreads the experience among local kids (and spreads their families out at the box office).  At any rate, if the other five are as accomplished as the Middletown High School South freshman Laura Diorio, who played it opening night, NJ Rep will have a treasure trove of female talent for years to come.

The uniformly fine performances reflect well on director Joel Stone, as does his perceptive use of the space – not just the stage dimensions, but the spatial relationship between dad and daughter.  Equally impressive is the spot-on baseball activity.  The pitch/catch bits are executed perfectly.

A serious failing is the over-use of the common vulgarity f-word.  We know Mike’s been in prison, but every sentence? Twice in some? Adjective, adverb, back half of a compound noun…even just blurted out on its own. Mike’s with his daughter, not his cellmate, for heaven’s sake. Playwright Dilorio, giddy with potty-mouth freedom, doesn’t spare Kerry either.  Talk about overkill: a few f-bombs from Mike would make the point; and one, maybe two from Kerry could be stunners.

Whatever.  These are all judgment calls.