Some musical adaptations of movies work fine – lord knows there’s enough of ‘em.  Disney knows how to do it (despite “Tarzan”). “Mary Poppins” has been running nearly six years, and “The Lion King” will be 15!  This past season, both “Newsies” (Disney again) and “Once” were Award winners, and musicals of “Diner,” “Sleepless in Seattle” and Woody Allen’s “Bullets Over Broadway” are on the horizon.

It’s no use debating their artistic merit; when they work, they work, that’s all.  So you have “The Producers” at one extreme, and “Young Frankenstein” at the other.  “Legally Blonde” falls right in the middle.  The mediocre musical received seven Tony and ten Drama Desk nominations, but came away with nary a win, which may be some sort of record.

Adapted from the 2001 movie that was better than it had any right to be because of Reese Witherspoon, the musical ran a year on the strength of Laura Bell Bundy’s nifty performance, but limped to a close a couple of months after her reality-show replacement took over.  (You heard of Bailey Hanks since?  Me neither.)

Now Leigh Emery is the blonde in Phoenix Productions’ brief run of “Legally Blonde” in Red Bank, NJ.  The show’s music and lyrics, by a team not heard from before or since, are undistinguished, and the book is a simple-minded mash-up of the original novel and the movie.  Director Anthony Greco has whipped everyone into shape and paced the show well, but there’s only so much one can expect from a show whose opening song lyric is “Oh my God,” repeated about 100 times. 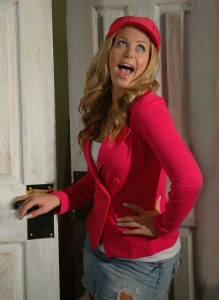 Blonde UCLA sorority girl Elle Wood (Emery) is dumped by her fiancé (John Caliendo) for not being “serious” enough to fit into his political career plans.  Elle manages to get herself admitted to Harvard Law, where her ex-fiancé, already hooked up with a new, snobby girlfriend (Kelliann DeCarlo), is enrolled.

Elle interns with an overbearing professor (Paul Caliendo), saves the day with a clever murder defense of a TV exercise babe (Meredeth MacDonald), and ends up, of course, with the fellow intern (Phil Mazzara) who’s been there for her all along.

Along the way, Elle gets earthy advice from Paulette (Andrea Brooks), the proprietor of the Hair Affair Salon, where the show’s signature song-and-dance number, “Bend and Snap,” is staged.

The good news includes Paul Caliendo, who aces the professor’s patter song “Blood in the Water”; Ms. DeCarlo, just right as the ‘mean girl’; Ms. MacDonald, who leads the show’s best performed and choreographed (by Tara-Lynn Eccles) bit, a synchronized jump rope number that really works.  “Bend and Snap,” on the other hand, has little snap.  (The show also includes a dreadful number that caricatures a gay male character.  Not just unfunny, it reflects poorly on all concerned.)

Ms. Brooks punches up Paulette’s big number, and Christopher Pica is on-target as her UPS-guy boyfriend.  Ashley Cusack’s outstanding scenery boosts the show up a notch or two. From the eight-window sorority house that opens the show, through Elle’s dorm room, the hair salon, an ivy-draped quad, even a department store, every locale is effective.  (And the stage crew hustles them on and off efficiently.) 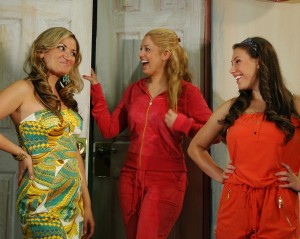 The Elle character carries the show, and Ms. Emery takes the on the job with style and energy.  She sings a couple of the forgettable songs quite well and “gets” most of the amusing valley girl intonations.  Emery is blessed with a generous supply of good looks, which doesn’t hurt the show.  Indeed, she’s something of a fashionista, from Elle’s trademark pink items to a tailored outfit and…a Playboy Bunny outfit? (Don’t ask.)

Overall, though, the costumes are a curious lot.  The men’s are standard garb, and other than Elle, the ensemble women, all young and attractive, spend much of the show in what appear to be their own motley shorts and tops.  I know they’re supposed to be casual college girls, but they’re also chorus girls in a musical comedy, for goodness sake.

“Legally Blonde,” with its predictable plot and perky young characters, seemed to please the opening night audience, although I doubt that anyone could remember one song the next morning.  Besides “Oh my God,” I mean.